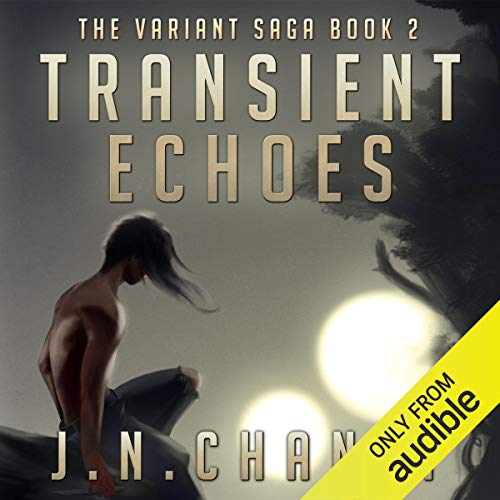 It has been three years since the day of the Second Jolt. Thanks to the efforts of a select few, the world is finally moving on. As the Variant air begins to thin, humanity finds itself on the cusp of a new age of exploration, but at what cost?

After closing the rift - the source of all Variant - the hybrid child known as Terry has been transported to a distant world, far away from the only home he's ever known. Completely isolated, and haunted by voices from his past, he wanders through the ruins of an ancient civilization long forgotten.

Back on Earth, a young woman named Mei works tirelessly to uncover the secrets of the rift. Against orders, she searches for the truth, making an unprecedented gamble. Will her obsession bring the answers she so desperately seeks or will it cause even more destruction?

What listeners say about Transient Echoes

This second audiobook in the Variant Saga continues the story of John, Mei and Terry. It picks up a few years after the second jolt and tells us the parallel stories of two different worlds. Terry is alone and fighting to survive in the harsh, strange world the explosion transported him to; new discoveries shock him and lead him on a poignant journey of discovery. Back at home, Mei is haunted by thoughts of Terry and, with John's help, she secretly works to find out what happened to him, leading to some unexpected finds and a glimmer of hope. I did find this narrator's whispery voice a little distracting at first but it grew on me in the end. This is a well written story that is just as entertaining and captivating as the first book. The parallel storylines compliment each other well and draw nearer together as the book progresses, leaving you dying for the two of them to converge. It is exciting, has plenty of action and his characters continue to grow in depth and appeal. In the end you are once again left dying for the next book to be out. I received this audiobook from the author at no cost in exchange for an honest review.

It is a great story and follow up for the first book. Absolutely loved it, the only complaint I have is that now I have to wait for book 3 to satisfy the need I have to find out what happens!

This book has continued the saga from Amber Project. Again, the character development is amazing. Writing two different storylines in two different worlds is difficult to manage but JN Chaney manages it with skill. I can't wait to see what comes next!

I really enjoy the journey that was taken on this book. Excellently written, beautifully orated, this book takes you to a new time.

Yes, the story is great. It picks up where Amber Project leaves off, in a stunning cliffhanger.

Did Steve Barnes do a good job differentiating all the characters? How?

I thought the narration was okay, but not great. It was just a little too unchanging to be a good dramatic reading.

When Terry lost his alien family--heartbreak!

I received this audio book for free in exchange for an honest review.

Although I really didn't have many complaints about book 1, the character development in book 2 made this installment significantly more enjoyable for me. In some ways, Transient Echoes is more focused than its predecessor. Where book 1 spread over Terry's entire childhood, book 2 spans only several months... perhaps in this way it was easier to live the story with the characters.

There was a short time where I was disappointed that this book provided no glimpse into what life was like underground or what was happening politically... but I pretty quickly got over that, as the novel feels so well-balanced as it is.

I listened to this book via audio (whereas I read book 1) and, overall, I did enjoy the narration. The narrator did a great job with the alien language, and it was an overall easy listen. The one thing that irked me about the narration-author collaboration was that the "audio files" were read as if a transcript was being read... I found it quite distracting. Maybe it would have been too hard to follow, but I would have preferred a more descriptive title to the audio file with a more audio play type performance for these tidbits.

I received this audiobook from the author.

The saga continues! Mr. Chaney does an excellent job of describing new worlds. The fight scenes are great! The eeriness of Terry's wanderings through his past are reminiscent of many horror books I have read. Another great book in the series...I hate to have to wait to see what happens next!

Slow but Worth it

Was slow reading throughout the book. BUT a good transition to book #3. The book itself truly is good enough that I put up with the narrator. I really hated how he used a 'whispery' voice. Almost didn't read the book because of it.I did enjoy the character developments. The story was somewhat predictable. Looking forward to the next book!

Audible made this an incredible experience. The narrator did a superb job making the story come alive and he didn't do any of the annoying voices, but rather had a fast, soothing way of talking. I highly recommend the audio version.

This story starts a few years after the first story left off and unlike the first book, this one is only told in alternating points of view from Terry and Mei. Chaney did an excellent job at giving this one a completely different feel while seamlessly continuing the same tale. There is non stop action that will have your heart racing, a number of surprising twists and turns, plenty of new characters, and an ending that will have you begging for book three!

I really enjoyed this book.The author has a talent for creating characters I care about.I found myself engrossed in the story wanting to find out Terry's fate.The world Terry inhabits is really well developed and the descriptions are wonderful.The narrator has a pleasant voice to listen too.I can't wait to read book three.I received an audiobook from the author in exchange for an honest review.

Fantastic and unexpected follow up to The Amber Project

I loved this book. It could almost stand alone in the series with it's original and interesting developments.

I really enjoy the different personalities of the three main characters and I'm very invested in the final outcomes of the next book when it becomes available.