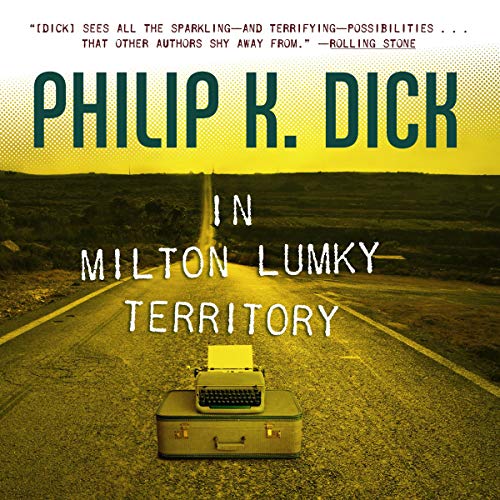 In The Novels of Philip K. Dick, Kim Stanley Robinson states that "In Milton Lumky Territory...is probably the best of Dick's realist novels aside from Confessions of a Crap Artist," and calls it a "bitter indictment of the effects of capitalism." Dick, on the other hand, says in his foreword, "This is actually a very funny book, and a good one, too."

Milton Lumky territory is both an area of the western United States and a psychic terrain: the world and worldview of the traveling salesman. The story takes place in Boise, Idaho, with some extraordinary long-distance driving sequences in which our hero (young Bruce Stevens) drives from Boise to San Francisco, to Reno, to Pocatello, to Seattle, and back to Boise in search of a good deal on some wholesale typewriters. He falls under the spell of an attractive older woman (who used to be his school teacher) and Milton Lumky, a middle-aged paper salesman whose territory is the Northwest. And then Bruce and the others slowly sink into the whirlpool of Bruce's immature personal obsessions and misperceptions.

A compassionate and ironic portrayal of three characters enmeshed in a sticky web of everyday events, in a tension between love and money, with a basic failure to communicate, In Milton Lumky Territory stands out among Dick's early works.

What listeners say about In Milton Lumky Territory