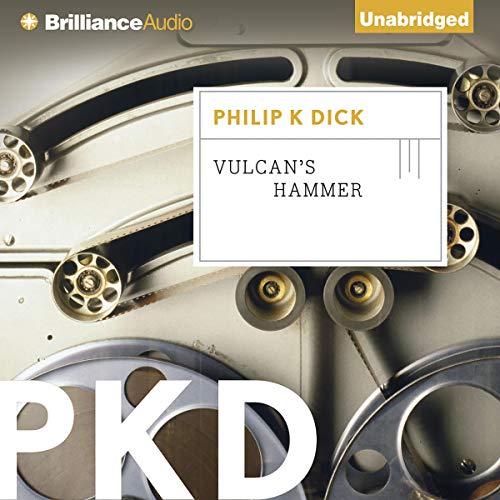 After the 20th century’s devastating series of wars, the world’s governments banded together into one globe-spanning entity, committed to peace at all costs. Ensuring that peace is the Vulcan supercomputer, responsible for all major decisions. But some people don’t like being taken out of the equation. And others resent the idea that the Vulcan is taking the place of God.

As the world grows ever closer to all-out war, one functionary frantically tries to prevent it. But the Vulcan computer has its own plans, plans that might not include humanity at all.

What listeners say about Vulcan's Hammer

All Your Base Are Belong to Us!

I'm not threatening you. I'm pointing out the facts to you. If we're excluded from the ruling elite, why should we cooperate?"
-- Philip K. Dick, Vulcan's Hammer

PKD (1965), Kubrick & Clarke (1968) & I. J. Good (1965) were all publishing early warnings about an eventual technological singularity. Recently, we've seen Verner Vinge in a great essay in 1993, and such computer/science/business geeks last year (Stephen Hawking, Elon Musk, and Bill Gates) swing the hammer of warning about self computers, robots, and programs capable of recursive self-improvement:

“Success in creating AI would be the biggest event in human history,...unfortunately, it might also be the last, unless we learn how to avoid the risks. In the near term, world militaries are considering autonomous-weapon systems that can choose and eliminate targets.” and “humans, limited by slow biological evolution, couldn’t compete and would be superseded by A.I.”
- Stephen Hawking, 2014 interviews.

Like with most of Dick's writing, he was there, near first in line looking over that technological event horizon with his unique blend of gallows humor, optimism, and ability to find the grit and the slime even in the slickest of futures.

One thing I did notice about this book, and I think it has been true in other of his books, but I never noticed in those, is how stripped down Dick can make some of his books. These are almost Beckett-level SciFi. I only have a handful of Dick left to read (not counting his monumental The Exegesis of Philip K. Dick and his many, many short stories, but I wouldn't be surprised if the next PKD I read had two robots, one named Vladimir and Estragon talking about God. That, in essence, is this book. It is Vulcan 2 and Vulcan 3 discussing, through man, the meaning of life, perhaps. Or perhaps, no.

But anyway, my point is in this books and several other Dick really trims the books down. Yes, there is a future, and yes, there are a variety of people and character, but what you notice, really is how spare the future is. 'Vulcan's Hammer' felt like it could easily have been produced in a community theatre with a couple actors, and two punchcard computers. That is an over-simplification, obviously, but it still feels close.

One other thought. I'm not sure the technological singularity is going to be a steep cliff. I think, personally, it feels more like the heat has been turned on and we are all sitting quietly in the water, waiting for Amazon to tell us what to buy or Google to tell us where to go. I'm no Luddite, and even if I were, I'm not sure I would know where to jump to.

This has a solid story and an excellent performance. It is well done and I recommend it

The story is pretty good, if a bit predictable, but Mel Foster is so damn slow at reading that I had to speed up the playback.