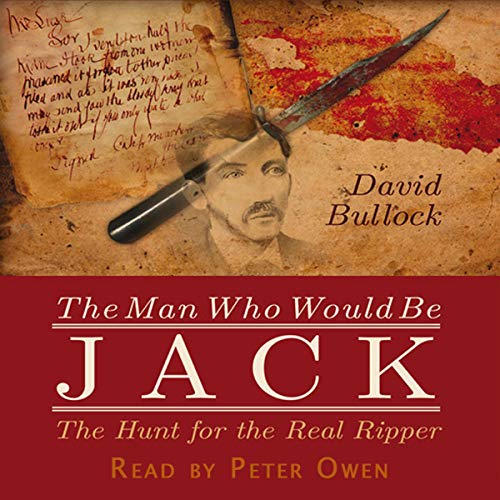 The Man Who Would Be Jack

The Hunt for the Real Ripper
By: David Bullock
Narrated by: Peter Owen
Length: 6 hrs and 35 mins
Categories: Biographies & Memoirs, Criminals
5.0 out of 5 stars 5.0 (1 rating)

The Man Who Would Be Jack

London, 1891. Less than three weeks after the last Whitechapel murder, 25-year-old Thomas Cutbush is committed to Broadmoor for savage knife attacks on two girls. The arresting officer, Inspector William Race, intrigued by the wealth of connections with the infamous unsolved murders in the East End, starts to wonder whether he has, in fact, arrested Jack the Ripper himself.

Ignored by his superiors, and in despair, the detective eventually decides to take his story to the press. Race’s actions unleash the biggest journalistic investigation of the time. The Sun puts its star reporters on the trail of Thomas Cutbush, and the startling new evidence and compelling eyewitness testimonies they gather set up a sensational scoop.

The Man Who Would Be Jack introduces the truly incredible story of the investigation conducted by The Sun and Inspector Race. With unprecedented access to long-hidden records, David Bullock brings to light findings that would, at last, expose the truth of one of the world’s most tantalising mysteries.

What listeners say about The Man Who Would Be Jack

it's a dry laying out of all the facts of the Thomas Cutbush angle as Jack the Ripper. convincing. to the point. not overwrought with detail. loved the narrator. good overall!

Well researched, but written in quick paced novel style. Could easily be a high suspense movie. A great read!