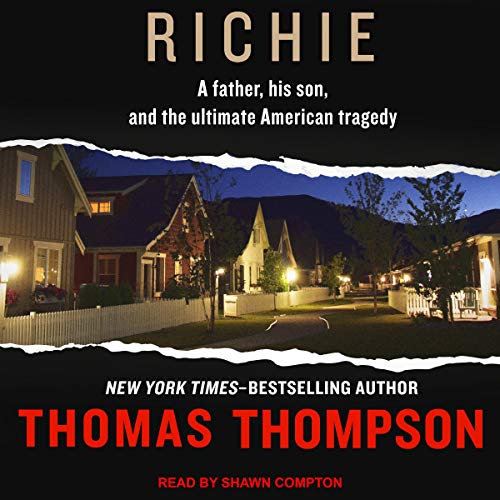 George Diener, World War II veteran and traveling salesman, and his wife, Carol, had old-fashioned values and ordinary aspirations: a home, a family, the pleasure of watching their two sons grow up. But in February 1972, an unthinkable tragedy occurred in the basement of their Nassau County residence, shattering their hopes and dreams forever.

George and Carol doted on their shy eldest son, Richie. But at 15, the boy fell into a devastating downward spiral. He started smoking marijuana, shoplifting, and hanging out with drug dealers, and was soon arrested for assault and expelled from school. By the time his parents sought psychiatric counseling for their son, Richie was addicted to barbiturates and given to violent outbursts and threats. The boy George and Carol knew was long gone. Then, one winter evening, Richie came at his father with a steak knife and a suicidal cry of "Shoot!"

Edgar Award-winning author Thomas Thompson delivers a "scary, harrowing" account of a turbulent era in American history when the gulf between young and old, bohemian and conservative, felt wider and more dangerous than ever before (the New York Times Book Review).

What listeners say about Richie

My heart ached for this family. I was Richie's age and remember so many of the details of this book in my own community. and social circle. While I personally didn't identify with Richie, I very much understood him and his contemporaries.
I'm thankful I didn't get into the drug scene which was escalating at an alarming pace at the time of this story.
And now I read this as a mother of 3 children with a different set of eyes- the eyes of Richie's parents.

This is the story of what drugs did to one family. It's truly an American tragedy that has played out over and over for so many.

The book was expertly written and while this is an old title it's timely as the drug war continues.

I thoroughly enjoyed this book, although enjoyed isn't really the word I'm looking for. It was a very good read/listen.

Good bad shocking book. Laws have made barbiturates highly difficult to get, for any reason other than seizures. I never realized that’s what downers were back in 70’s. I thought it was like Xanax. But barbiturates are dangerous. It leads to death, and is part of the lethal execution in most states.
The story is sad, and I don’t know how else the dad could have reacted. It’s terrible situation! Very interesting true crime!

tradgic story which came happen to anyone. unfortunately it is difficult to find the answer other than this outcome.

The book is an account of the slow and sad decline - and then slaying - of a boy increasingly addicted to drugs. It is also illustrative of the vast generational chasm that existed between young boomers and their parents. The boy in question, Ritchie, decides to rebel against his parents and adults in general - the people who had grown up in an orderly and rigid society, and who expected their children to also conform.

His father’s failure see past this or re-connect with his increasingly angry and disillusioned son makes for grim listening. However, I shan’t go into any further details for fear of spoilers.

Published in 1973, the book also recounts a now almost-forgotten drugs epidemic, whereby major pharmaceutical companies purposefully over produced ‘downers’, primarily barbiturates, in the early 1970s and then flooded the USA with their output. As their profits and reach grew, so the toll on American society grew as well. As Ritchie struggles and falters, it’s worth recalling that even the rich and famous - including the likes of Elvis Presley - fell into the same trap at the same time.

This small story also acts as a warning when it comes of today’s opioid crisis and, in the USA, what happens when an overwhelmed and disinterested medical system is forced to pick up the pieces Big Pharma leaves behind. In that sense, this is a very modern tragedy.