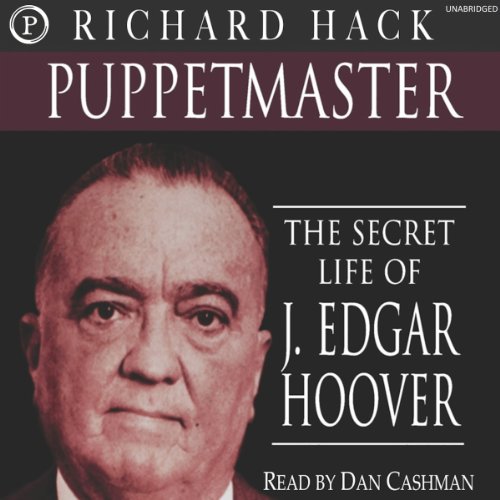 Richard Hack separates truth from fiction to reveal the most hidden secrets of Hoover's private life and expose his previously undisclosed conduct and actions which threatened to compromise the security of the entire nation.

Based on freshly uncovered files and personal documents as well as over 100,000 pages of FBI memos and State Department papers, Hack rips the lid off the FBI Director's facade of propriety to detail a life replete with sexual indiscretions, criminal behavior and a long-standing alliance with the Mafia.

What listeners say about Puppetmaster

As with his biographies of Howard Hughes (Hughes) and Ted Turner/Rupert Murdock (Clash of the Titans), Richard Hack brings a novelist’s flair for drama and a journalist’s nose for truth to the life of J. Edgar Hoover. Hoover was the Director of the FBI for more than fifty years; he served nine different Presidents and sixteen Attorney Generals. The book is well-written and meticulously researched even thorough it does not reveal any new findings. The author attempts to keep this a balanced and impartial look at the facts. He covers Hoover’s life from childhood and his relationship with his mother to establishing the FBI to his death.

Hack’s most controversial conclusion about Hoover’s private life is that despite his weird intimacy with sidekick Clyde Tolson, and his household collection of male nudes and Chinese Ceramics, Hoover was not gay. I think you need to read the book and evaluate the facts, as the author presents them and make up your own mind on how to interpret the stated facts. The author goes into detail how Hoover set up the organization of the FBI but does not go into deal of its operation. Hack includes the headline-grabbing pursuit of Depression-era outlaws to his post-war crusade against left wing subversion. The author says little about the FBI as an institution or its crime fight methods. Over all he portrays Hoover as an intelligent, highly organized, determined , energetic, lonely and insecure man who comes off here as much as a puppet as master. Hack reveals Hoover as a consummate bureaucratic infighter aware of his vulnerabilities to shifts in political power.

The book was originally published in 2004 and republished again in 2007. The audio book was re-mastered into digital format. Dan Cashman did a good job narrating the book.

Good, but author seems to be fond of Hoover

Would you try another book from Richard Hack and/or Dan Cashman?

Probably not. The information was boring. The author beat a dead horse about unimportant details but provided no substance. I learned more from newspaper articles. I have read quite a bit about J. Edgar who was fascinating to say the least. I was hoping to discover additional information when I purchased this book. Oh, boy. Surprise, surprise, surprise! The author totally missed the mark. Boring. The narration was also poorly performed.

Has Puppetmaster turned you off from other books in this genre?

Of course not. However, I will try to be more thorough with my vetting before I invest my hard earned coins again. One bad book doesn't poison the whole batch.

Who would you have cast as narrator instead of Dan Cashman?

The narrator was terrible but to be fair, the material was pretty worthless. So, I don't know. Maybe Little Lulu would be a good candidate?

If you could play editor, what scene or scenes would you have cut from Puppetmaster?

Chapter 1 through the end.

Just don't waste your time or money. This book should not qualify to be called a book. Pretty dadgum bad.

What did you love best about Puppetmaster?

The whole story was fascinating.

What does Dan Cashman bring to the story that you wouldn’t experience if you just read the book?

Dramatization of the book, there is something about someone else reading to you that you do not get reading yourself.

It was realization of the corruption of the FBI was really one person's ignition that festered and grew over time.

Author seems to have an axe to grind here

The author's name is hack and it applies here. Granted J. Edgar Hoover was a complicated and controversial person. I think anyone that was in public life and wielded that much power probably would be. But this author choose to mostly highlight the negative and used much creative license and assumptions to do so. Most all the stories he recites here involve controversial figures from the left wing to some that are downright wing nuts.

Shame as the performance was top notch and the story and history here is amazing.

Not being old enough at the time, I always thought thru my parents that this is what a real patriot was. Who knew!!!

Much thought has been put into the book and the story was told in an engaging and unbiased manner. If you are interested in learning about J Edgar Hoover, his impact on history and our contemporary world, this is the book that you have been looking for. Those of you who are intrigued by my comment about the "contemporary world", you definitely should read this book and see how the FBI under J Edgar Hoover influenced security in our post-9/11 society.

Well written and narrated. Took some time to finish, but found the material very interesting.

The daily life of J Edgar Hoover has long been the cause of rumor and speculation. The telling of its everyday details, though, would be dull reading without the storytelling talents of Richard Hack and particularly the narrative talents of Dan Cashman, who could inject mystery and innuendo into a list of grocery items. Well done, gentlemen.

Absolute power corrupts and so does secrecy.

This book changed my view on the man Hoover and the USA he sought to protect.

What disappointed you about Puppetmaster?

Too much irrelevant detail; not enough detail on any of the key incidents and events in which he was intimately involved - especially post the Kennedy assassination but also the relationship with organised crime. A very limited insight into his life influences and what may have influenced his thinking about key episodes in the history of the FBI

Who might you have cast as narrator instead of Dan Cashman?

Not able to comment as I do not know the choices and a number of other factors.

It could be abbreviated to give a general overview of a timeline.