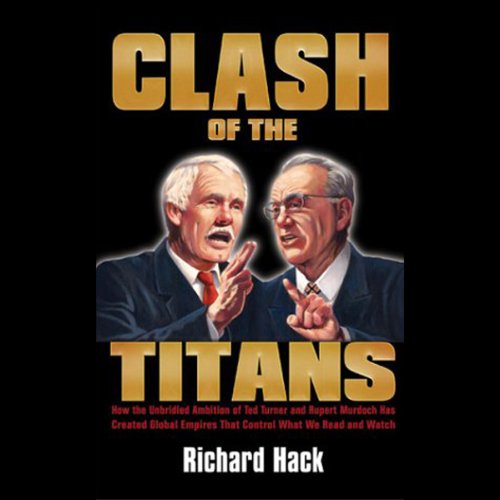 Clash of the Titans

Ted Turner is the brash, outspoken and unpredictable vice-chairman of AOL Time Warner who jockeyed a small billboard firm into a $3 billion cable empire that includes - but is not limited to - CNN, Superstation WTBS, and Turner Network Television.

Rupert Murdoch is the ruthless media baron whose News Corporation started with one paper and grew to include over 125 papers and magazines around the world, Fox studios and television networks, and broadcast satellite services in Europe, Asia, and Latin America.

Theirs is a fierce rivalry that has accelerated the race to deliver information and entertainment across the globe. Together they wield the ultimate one-two punch in the media power game. This outstanding dual biography delves deep into both of their lives-public and private.

"Hack's vision of megabusinesses as a reflection of the personalities of those who run them is gripping and exceptionally vivid, a sparkling, immensely enjoyable portrait of extraordinary men." (Publishers Weekly)

What listeners say about Clash of the Titans

Interesting comparison of two titans who came head to head in the entertainment industry. I disagree with maryfj, I did not find it one-sided at all. The author does slam each character, but does it in an equitable manner. The book is focused more on their rise to fame than the actual "Clash", it left me wanting more recent information, but the history of each one of the titans is interesting nonetheless. Very good reader. I recommend.

Very very exciting and interesting for anyone who may want to follow in the footsteps of these guys. Motivating and fun.

The authors political bias RUINS this one

By the end of the first chapter you will have no trouble telling who this author will be voting for in the next election. It's too bad, had it been done with even a hint of an objective eye, this could have been a really good book.