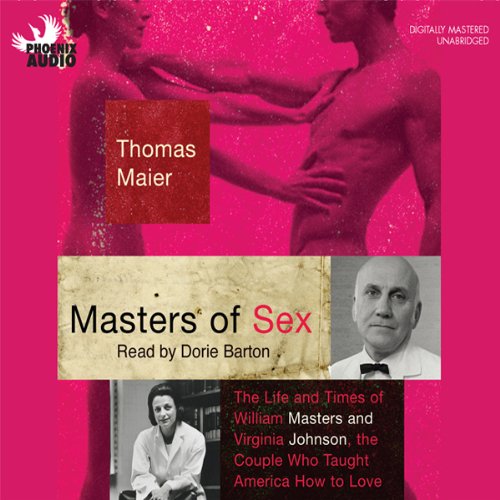 In Masters of Sex, critically acclaimed biographer Thomas Maier offers an unprecedented look at Masters and Johnson, their pioneering studies of intimacy, and their lasting impact on the love lives of today's men and women.

Masters and Johnson began their secret studies in a small Midwest laboratory working with prostitutes and volunteers who performed more than 10,000 sexual acts in the name of science. They soon became the top experts on sex for more than 40 years, explaining the untold mysteries of orgasm, emotional fulfillment, and sexual dysfunction to millions of Americans. Thousands of patients relied on their highly successful sex therapy, from politicians and Hollywood stars with marital problems to gay men and women seeking "conversion" to heterosexuality. Masters and Johnson were America's ideal couple, but they divorced after 20 years amid a clash of ambitions, betrayal, and jealousies.

Theirs is a classic tale of love, work, and fame against the backdrop of an American sexual revolution which they inspired. Weaving interviews with the notoriously private William Masters and the ambitious Virginia Johnson, who championed the power of female sexuality during her own quest for true love, Maier offers a titillating portrait of the legendary team.

Entertaining, revealing, and beautifully told, the groundbreaking Masters of Sex sheds light on the eternal mysteries of desire, intimacy, and the American psyche.

What listeners say about Masters of Sex

it touched my heart

this book has helped save my marriage and sex life :)

The substance of the book is interesting and moderately well written. The narration, on the other hand, is maddening. The narrator has a very "little-girlish" voice -- think Goldie Hawn. In and of itself, that would not be a problem. The issue is that the narrator doesn't seem to have read the book, or any of its individual sentences, before starting the recording session. Each sentence is an adventure in emphasis. Sometimes the emphasis on particular words in a sentence is correct. As often as not, however, she puts the stress on the wrong word and it sounds terribly awkward. It seems like she is simply saying the words as they come along with no idea of where the sentence is going or what it means. (Doesn't anyone listen to these before they are sent out?) I've listened to over 50 audiobooks and this is by far the worst narration I've ever heard. The narrator also swallows her words and has a hard time with pronunciation. (To give one example, the town of Spokane, Washington is pronounced "spo-can" not "spo-cane.") This audiobook should be pulled off line and re-recorded with a narrator who knows how to read out loud.

A passable book on a fascinating subject

Like Kinsey before them, Masters and Johnson were truly groundbreaking, and took enormous professional (and personal) risks to move their work forward. But the book, while extolling the virtues of opening up the country's thinking about sex, succumbs to good ol' tabloid-esque sex expose writing in the latter third as it strives to show off Masters' personal-life failings. It's still worth a read, if you're interested in their revolutionary work.

The narration is solidly second-rate. While the narrator's overall style and voice characteristics are fine, she tragically mispronounces a number of words, which is as much the fault of the director as her. There are segments where she also seems fatigued, and doesn't put as much care into her reading as the earlier bits. That Ms Barton has no other reading credits on Audible is telling.

Scandalous and A Must Listen

I found this book very interesting. Masters and Johnson really ushered in the sexual revolution. Their research accounts alone keep you listening, but the candid personal life and sexual relationship makes it a provocative must read. I am suprised more people are not downloading this book.

I'm a fan of the Showtime series and listened to this book (upon which the show is based) following season one. First: the narration is not that bad. The occasional mispronunciations and fatigue in Ms. Barton's voice were slightly distracting, but her reading is pleasant enough. Second: the book gives a deeper background on Virginia Johnson's motivations, and—assuming the series follows the book in season two—I now think I better understand why some of the show's subplots exist. I heard little of William Masters' voice in the book; Mr. Maier interviewed Johnson in person, and had to rely on Masters' unpublished autobiography and other people's interviews for the doctor's perspective. A potential spoiler for the show...so stop reading now if you don't want to know... ... ... is that Johnson denies that Masters ever had a low sperm count. Of course, the show may veer away from the book any number of ways, but I enjoyed reading it and comparing the two.

I was expecting something more about the study of sex, this is a biography of two people who studied sex. I was a little dissapointed with the lack of insight into sexual behavior, but enjoyed the history more than I thought I would. It's an important field of study and after this book, I feel a sense of gratitude to the people who first got the ball rolling.

Better than the Series

I read this book after I heard about the TV series. It's difficult to compare them because they are so different, but in the end I liked this a lot better than the TV series because this was all non-fiction and the TV series added lots of subplots and stories out of their imagination. The real-life anecdotes that were in this book were far more appealing and interesting to me. I got much more of an idea of who Masters and Johnson were. Masters comes off as... well, not a great person, not even a good person. He had an obsession, he fulfilled it. Virginia Johnson, on the other hand, really shines in this book, and I was left with the impression that this research never would have gotten off the ground without Johnson's superb people skills, being able to draw out truth from people, and being able to convince people to engage in experiments that they would otherwise avoid. What surprised me, though, was that some of the more astonishing revelations of the TV series were in this book, and really happened. And this also included some fascinating anecdotes and findings that never made it to the TV series. I recommend this to anyone who enjoyed the TV series.

I would not recommend this audiobook due to the narration. The reader's speech is too rapid and her emphasis in sentences is frequently way off, making the listener strain to understand what is being said.

William Masters and Virginia Johnson changed our view of human sexuality with their ground-breaking research. The started a revolution when they dispelled many myths and made it possible for us to have greater sexual knowledge and freedom. They were ahead of their time and the backlash against their work adds interest to their story. And, of course, the relationship between the two of them is the stuff of novels.

Her speech is to rapid and the emphasis is often on the wrong words. It's among the worst narrations I've heard.

Would you be willing to try another one of Dorie Barton’s performances?

Sadly, no. Her misprinounciations of commonplace words became distracting, and detracted from the book's general intelligence

Since Showtime canceled the series after the fourth season, I wanted to know more about Masters and Johnson. It was very interesting how the tv show is very loosely based off of their real lives. For example, in the show, Betty is a prostitute, but in actuality Betty was a nickname of his first wife, Elizabeth Ellis, also know as Libby.. They had two children together, not four.

After Masters and Johnson got married, the possible fifth season begins in this book. I like reading, but I also really enjoy watching television. "Masters of Sex" by Thomas Maier is a decent read. After over 20 years, Masters got another divorce from his second wife and married his first love, Dody and later died of Parkinson's.

Expertly described the facts of the good the bad and the ugly sides of it all. it was enthralling, and in the end heartbreaking. Ive learned so much and admire them both.

Great Book About An Overlong Story

The reader is good (though a bit odd in the first 10-15 minutes), the boook is well written, but the story itself drags on for too long (no fault of the author). This biography reminded me of reading Einstein's biography. The "hero(s)" attain(s) stardom early in life and then one is finding it hard to get motivated reading about the humdrum that is the remaining 30 years of their life.

I liked it overall but it was very drawn out. The work is very interesting but can't help but feel my interest was helped by already having psychology degree and watching the first series of the tv show or it would have been quite tedious. I'm glad I bought it though overall quite good

Quite monotonous. I did not enjoy the narrator, seemed like she was reading a text book. I had expected more.