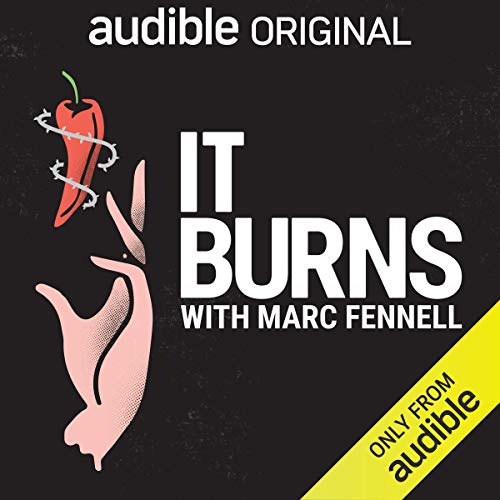 What listeners say about It Burns

Not what I was expecting!

I thought I knew what to expect from a podcast about chilli eating, but I truly had no idea how deep the rabbit hole could go! Great balance of unexpected facts, complex (and sometimes whacky) characters and Marc's personal story.

I've always been a fan of Marc Fennell's wicked sense of humour and I like the way he becomes part of the story in an authentic way. It makes this is very entertaining and easy-to-listen podcast that I finished in one weekend.

A great insight into the crazy world of chillies

Loved the story, but also Marc was entertaining and great interviewer, if you are interested in the chilli world, a great listen

Turning up the heat on chilies

I don't eat chilies but this looks at society in brand new angle. It takes s look at the society in a whole new way, metaphorical and with realism that is a surprise. ITS NOT ONLY ABOUT THE CHILIES ITS SO MUCH MORE. Highly recommended. 10/10

loved this podcast! thank you Mr. Fennell. Twists and turns throughout the episodes loved it.

Interesting how the podcast uses chilli culture as a window into the human condition - what motivates us, how we interact with pain and relate to other people. You quickly realise that chilli heads are much more complex and nuanced than you might imagine. Was a riveting story!

Loved it. Marc is awesome! Music is spot on. Please make more like this and Nut Job. Felt seriously disappointed when it finished.

better than I thought it would be

brilliant narrator, interesting interviews and funny stories. A must listen if you like hot sauce

I dare you to listen

A fascinating adventure into one of the worlds most potent ingredients. Brilliantly presented and at times too hot to hear.

Mark Fennell is such a natural host. I'm not at all interested in peppers but this was addictive.

If you like you're chillies then this is definitely one to listen to. Very well presented with some disturbing facts about competing to grow the hottest chilli

wow not what you are expecting

it's not what you are expecting . very well written and maid. well worth to lissen.

Unexpected at every turn. an excellent piece!

Excellent blending of a good story, some facts and a truly creative narrative. I listened to it on a whim and was enthralled.

Too hot to handle?

this is funny. I love spicy food so I'm finding it very interesting hearing about the hottest jalapeños .

really enjoyed the dark side of Chilis

really interesting intrigue I'm the world of idiots and addicts. great backstory from the author

light and illuminating investigation. Really explored the amount of passion driven by one food and in it's influence.

a real a really good read ,an amazing account of how how something so simple can cause so many problems 🤭