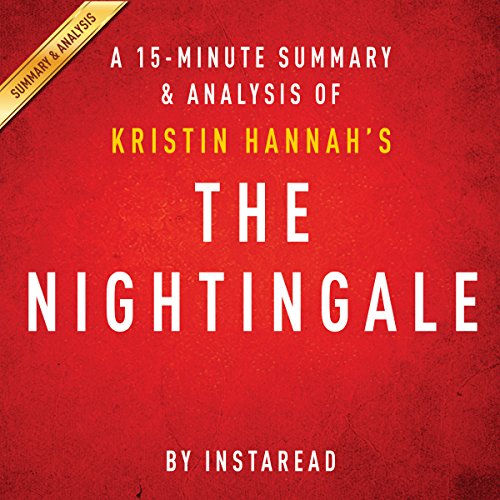 The Nightingale: by Kristin Hannah | A 15-minute Summary & Analysis

The Nightingale is a historical novel by writer Kristin Hannah. It tells the story of two French sisters, Vianne Mauriac and Isabelle Rossignol, during the German occupation of France in World War II.

Fifty years after the end of the war, a recently widowed woman in a coastal town in Oregon is preparing to move to a nursing home because her cancer has returned. Her son, a surgeon, comes to help her and finds her in the attic, going through a trunk of old things he has never seen.

In August of 1939, Britain and France, despite having declared war on Germany, have not engaged in any military battles with the German Reich. Tensions are high among the French citizenry as they await the start of the war. The sufferings of the Great War, and the millions of lives lost, are still fresh in their minds....

Please note: This is an unofficial summary and analysis of the book and not the original book.

Inside this Instaread Summary and Analysis of The Nightingale:

What listeners say about The Nightingale: by Kristin Hannah | A 15-minute Summary & Analysis

Great summary for a book club

Would you listen to The Nightingale: by Kristin Hannah | A 15-minute Summary & Analysis again? Why?

Yes - I have listened to it many times.

What was one of the most memorable moments of The Nightingale: by Kristin Hannah | A 15-minute Summary & Analysis?

When the main character has to share her home with a Nazi general and learns to respect him.

When the Nightingale safely gets American pilots to safety.

If you could rename The Nightingale: by Kristin Hannah | A 15-minute Summary & Analysis, what would you call it?

French woman and their war efforts in WWII.

Errors in summary of the plot

Errors in summary of the plot as if the person who wrote the summary had rushed through the story.

Don't waste you time and money...

instead read the free summary of the actual book. The voice of the reader was full and boring.