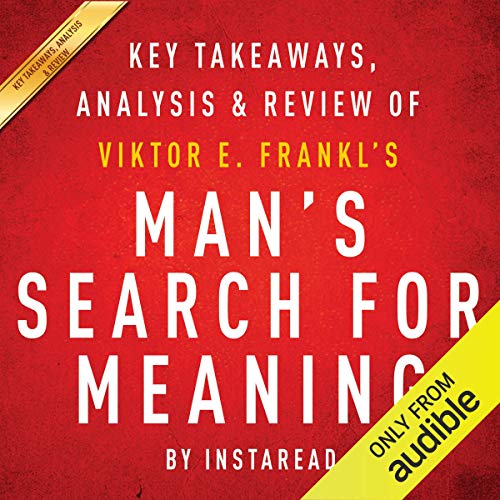 By: Instaread
Narrated by: Michael Gilboe
Free with 30-day trial

Please note: This is key takeaways and analysis of the book and not the original book.

Man's Search for Meaning by Viktor Frankl is a memoir of Frankl's imprisonment in concentration camps during World War II and a brief description of the principles of logotherapy, a school of psychotherapy that he founded.

Frankl and his family were imprisoned in concentration camps during the war. Frankl was held in several camps before he was liberated from the last in 1945. During his time in the camps, Frankl witnessed the extreme cruelty of camp guards and the prisoners who were given special status by them, also known as Capos. He also witnessed the cruelty of the prisoners to each other as they underwent the three stages of reaction to their imprisonment. These stages are denial, acceptance, and adjustment after their release.

Frankl discovered that although the prisoners seemed completely powerless, they had the freedom to choose their reactions to their circumstances. Those prisoners who were most resilient were those who had something to live for....

Inside this Instaread of Man's Search for Meaning:

Summary is a good overview

It's a lot shorter than expected, but long enough to get the overall crux of the message. In short: we can't control what happens to us, but we can control our reaction and attitude in response.

The best summary of this book

Very helpful and definitely worth the price.

Very good synopsis of Frankel's book. The analysis added was very helpful as well. Job well done. I highly recommend this to help the reader better pull together Frankl's messages.

it's a book review. it should be free. don't waste your time or money on this.

Get the full version.

The lack of story telling caused the book to feel rather light weight and lacking substance. Although it can be argued that this was just an overview I think specific quotes from the book would have helped.