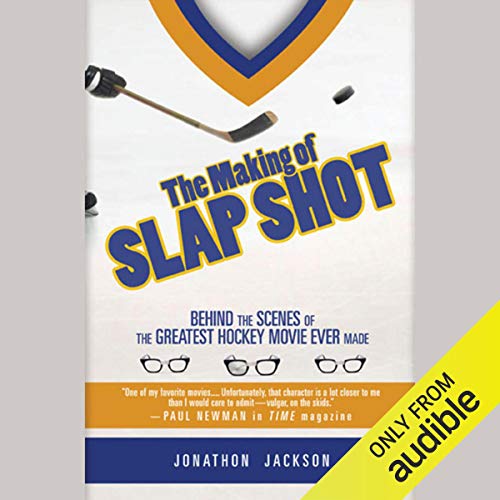 The Making of Slap Shot

Even 30-odd years after Slap Shot's release, diehard hockey fans can still recite scenes of dialogue by heart, making lines like "putting on the foil" just common argot for the devoted. Yet many may be surprised to learn that the true story behind the making of the film is as captivating as the film itself. In The Making of Slap Shot, veteran sports writer Jonathon Jackson lets fans not only relive just how the film was made, but brings to light surprising facts (i.e., Al Pacino was the first choice for the role of Reggie Dunlop; almost every scene-even the absurd and unbelievable ones-depicts a real life event). With access to those involved in the making of the film, he brings to life some of the magic behind the creation of memorable scenes and characters, especially the Charleston Chiefs, one of the most popular fictional sports teams in history.

Destined to be a collectible and keepsake (along with the jerseys, bobbleheads, and other paraphernalia associated with the film), The Making of Slapshot is a must for fans eager to learn even more about their favorite film.

What listeners say about The Making of Slap Shot

I love the movie (not the sequels) and I love hockey so, naturally I picked this title up immediately and couldn't have been more pleased. A great behind the scenes look into one of my favorite movies. Excellent narrator too. Stop reading this and just purchase it already!!! If you liked the movie then you will not be disappointed!!!

More cinematic background than I wanted.

What did you love best about The Making of Slap Shot?

There were some good hockey background stories, though not enough. Too much movie industry background for my liking, but that may appeal to others. I am a hockey fan far more than a movie fan.

The Hansons of course, and Paul Newman. It was great to hear that Reg Dunlop was Newman's all time favorite character to play, and that Slap Shot was the most fun he ever had making a movie.

The narration matched the pace of the story pretty well, but the narrator could have learned to pronounce the French Canadian names correctly. He takes a pot-shot approach to a few, trying different ways at various points in the book so he can say he got it right at least once. It's a hockey book, so you know there are going to be French Canadian names... Be glad it was in the 70s and he didn't yet need to try any Slavic names!

I would like to have listened to it in one sitting, but generally listen as I drive, so my audiobooks get broken up depending on the trip lengths. I did sit in the car a few times to hear out a storyline.

Overall a good book, but does not compare to the more amusing stories told in Dave Hanson's Slap Shot Original. I wish he'd make an audio version of that.

narrator frequently butchers names important to the story. unforgivable in a time when a Google search can usually provide guidance. mars the book.

With a book like this about one of the greatest sports movies ever made - it would have been helpful to have a narrator who can show some emotion. He was just reading the words, he also misprounced cities and the names of some NHL greats.

The Perfect Book for the Slap Shot Geek

Jonathan Jackson's loving attention to detail and scholarship in going into the making of this much beloved (for hockey fans) movie that is in my top 3 favorite sports movies of all time. Some very, very interesting stories on the screenwriter, actors, the city and filming process of this movie. I very much enjoyed this Audible Original.

For sports fan, not really for movie students

If you're a rabid hockey fan, or a huge fan of the movie, you'll love this book. Full of hockey history and examinations of the great characters in hockey. However, if you're coming more from an interest in filmmaking and how movies are made, this book is not for you. The actual making of the movie makes up a relatively small percentage of the book, as it focuses more of the history of hockey in Johnstown.

Great behind the scenes story!

Fun stories about the movie. The narrator really needs to learn how to pronounce names. it was painful.

the book is a little starstruck - after all, Slap Shot is a fun movie and I like it for the same reasons as I like wkrp in Cincinnati. ... the realism and credibility. but it isn't "lawrence of arabia"

Good to relive the movie and . charters like more of what happened filming