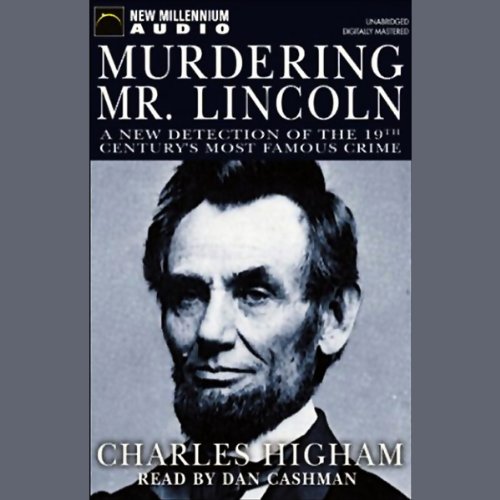 In this startling and original work, best-selling author Charles Higham addresses one of the greatest historical mysteries: did John Wilkes Booth act alone on the night of Good Friday, 1865 or was he part of a wide conspiracy?

Drawing from letters, diaries, previously unstudied records of official hearings, railway timetables, and obscure shipping manifests, Higham has woven a spellbinding account of intrigue. He proves conclusively that high-level figures, including those in government and trade, were involved in the murder plot, and not John Wilkes Booth alone.

Higham shows for the first time that Lincoln unwittingly sealed his own doom. By allowing trading with the South in contradiction of his own laws, he enriched a circle of powerful people who, once he had outlived his usefulness and handed over the arrangements to others, marked him very quickly for assassination.

I thoroughly enjoy history and historical novels. The extent of the research and explanation of the plot are to be commended, but therein also lies the downfall of this book. I forced myself to read 60-70% of the story, but was so overwhelmed with details of names, places, dates and interwoven facts that I could not possibly keep up with who was connected with whom, or what. Admittedly this was a very complex conspiracy and the author has obviously put a lot into telling it accurately. If you enjoy this type of book, give it a go and hopefully you'll digest and enjoy it better than I.

Think twice before choosing this audio book. Mr. Higham has done his homework well; it is clear that this book is painstakingly researched down to the smallest detail. No doubt, the murder of Mr. Lincoln was not as simple as a lone gunman happening by Ford?s theater the night Lincoln decided to take in a play. However, a story would have gone a long way towards tying together the myriad details that Mr. Higham has uncovered regarding this case. I found myself overwhelmed by the names, dates, and events that flew off the pages. I would have liked a bit more of a gripping narrative to hold it all together. Scholarship gets an A+, listenability a C- at best.