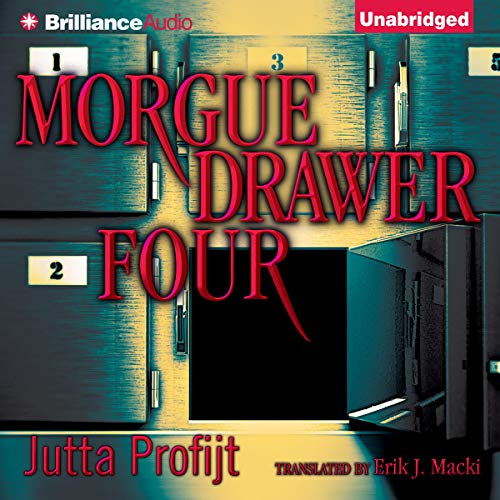 Shy, but scrupulous, he is happy working as a coroner in the Cologne morgue - until one of his usually taciturn “clients” starts talking to him. It seems the ghost of a recently deceased (and surprisingly chatty) small-time car thief named Pascha is lingering near his lifeless body in drawer number four of Martin’s morgue. He remains for one reason: his accidental death was actually murder. Pascha isn’t too keen on the good doctor, considering the tidy manner in which his body was dissected upon the autopsy table. But Martin is the only person Pascha can communicate with, and the only person who can do the detective work required to smoke out his killer.

Desperate to reclaim his quiet life, Martin grudgingly agrees to help the ghost, setting off on a wild adventure through the city’s red-light district and the dark world of German car smuggling. Witty and unexpected, Morgue Drawer Four introduces a memorable (and reluctant) detective unlike any other in fiction today.

My first read by this author

This is the first book in a series. It is a light and amusing mystery. I have listened to all three in the series. I hope there will be more to follow.

We found this book to be quirky, adorable and quite enjoyable. I think it's worth your time, though expect a very idiosyncratic little story.

Stick with it, it's great!

Yes. I learned a bit about Germany.

Hard to pick, the 2 main ones

Love how each character's voice was different enough to determine which was speaking. I take it when all male/female voices sound the same. It makes it hard to follow.

Was Morgue Drawer Four worth the listening time?

Yes. It took a little getting used to. I almost paused it for another day, but I stuck with it, and it really gripped me in the middle.

Listening is OK, Reading is better

I got the first book on Kindle last week - not quite sure why - reviews I guess - and a look through the first couple of pages.

I don't write Amazon reviews and enjoyed the book so much that I just bought the $1.99 companion version so I could write an Audible review. The reading is OK, and more or less appropriate to the protagonist, but the print version is MUCH better, and more appropriate because after all, in "real life" - or I guess "real death" - Pascha, nee Sacha, wrote the story.

I'm most of the way through the second book, and looking forward to the rest of the series. It's a "beach read" for mid-winter weekends.

Unique concept, well done. I liked the interplay between Pasha and Martin, and the narration was perfect.

I enjoyed the book and would check out any others by this author. I also believe that the narrator did well

excellent but be aware this continues in book 2

I would have gotten book two in this series anyway because I really like the story, the writing and I think MacLeod Andrews is one of the best narrators around, but I do not like the fact that it ends like the Perils of Pauline, with her tied to the railroad tracks and you have to wait until the next episode to see if the train runs over her. Well, you know it didn't but still... I don't like all the loose ends hanging that demand you get the next book.

Still an excellent story - define 5 stars all around.

If you could sum up Morgue Drawer Four in three words, what would they be?

What other book might you compare Morgue Drawer Four to and why?

ON YOUR WAY OUT, TAKE OUT THE TRASH.

What does MacLeod Andrews bring to the story that you wouldn’t experience if you just read the book?

PLEASE USE A CREDIT AND BECOME ADDICTED TO THIS AUTHOR.

Would you try another book from Jutta Profijt and/or MacLeod Andrews?

yes, both were excellent, story moved along nicely.

Would you ever listen to anything by Jutta Profijt again?

yes, hopefully will be more with these two charactors.

i liked everything about it

I truly enjoyed the book, the main characters, and the narrative was very very good.

A refreshingly different and original detective story, amusing and entertaining and, as always, narrated masterfully by MacLeod Andrews. Looking forward to listening to the sequel(s) :)

Andrews' ability to capture different personalities in his voice was amazing. His comedic delivery was perfect. He brought the book to life for me.

I have to say that this was not the kind of book I would normally read/listen to. First it was a translation, which often means the essence of a book changes. Second it was about a petty criminal in Germany- nothing to relate to there for me. And lastly, it didn't have any romance. What it did have though, I discovered after listening to a sample, was a wicked sense of humour. So I got the book and the rest of the series. And I was not sorry. This is seriously a fun, interesting and fast-moving series with a lovable hero whose insights into the world had me in tears more often than not. I LOVED this series and I recommend it to anyone with a funny bone.

Interesting premise, characters well written and the narrator adds to the overall quality. Quite a light read in that there is no unnecessary violence or graphic detail but intriguing - although the mystery is all tied up it finishes on an open note to tempt you nicely into the next book.

Two minds better than one?

I really enjoyed this book. It made me think a little of Christopher Brookmyre. By turns funny and intense. I got it the Audible version along with the Kindle and I loved the narration so much I just listened to it. McLeod Adams does a tremendous job.

You couldn't get two more different lead characters. The late (and not particularly lamented) Pasha, an appallingly sexist and self-centred small time crook and Martin, a somewhat nerdy, duffelcoat-wearing pathologist/coroner with a strongly ordered existence.

When Pasha's body ends up on Martin's post-mortem table after being murdered, his spirit sticks around and the two become inextricably interlinked. Martin is the only one who is aware of Pasha and in order to end that connection he starts to investigate Pasha's murder. In the process his ordered life falls apart. It ends on a bit of a cliff hanger and I've already got the second book in the series (Morgue Drawer Next Door) lined up to listen to.