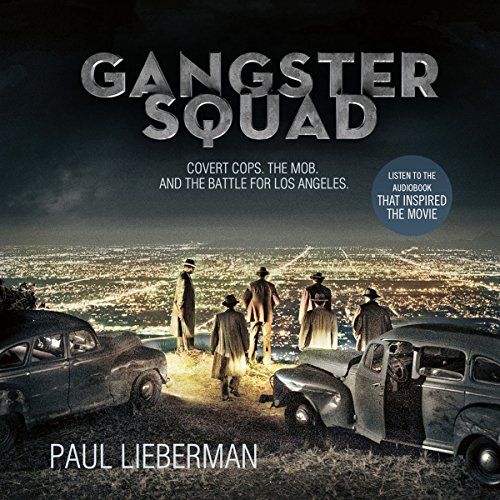 A harrowing, edge-of-your-seat narrative of murder and secrets, revenge and heroism in the City of Angels - the real events behind the blockbuster Warner Brothers film starring Sean Penn, Josh Brolin, Ryan Gosling, and Emma Stone.

Gangster Squad chronicles the true story of the secretive police unit that waged an anything-goes war to drive Mickey Cohen and other hoodlums from Los Angeles after World War II. In 1946, the LAPD launched the Gangster Squad with eight men who met covertly on street corners and slept with Tommy guns under their beds. But for two cops, all that mattered was nailing the strutting gangster Mickey Cohen. Sgt. Jack O’Mara was a square-jawed church usher, Sgt. Jerry Wooters a cynical maverick. About all they had in common was their obsession. So O’Mara set a trap to prove Mickey was a killer. And Wooters formed an alliance with Mickey’s budding rival, Jack “The Enforcer” Whalen. Two cops - two hoodlums.

Their fates collided in the closing days of the 1950s, when late one night “The Enforcer” confronted Mickey and his crew. The aftermath would shake both LA’s mob and police department, and signal the end of a defining era in the city’s history.

In 2008 award-winning journalist Paul Lieberman’s seven-part Los Angeles Times series “Tales from the Gangster Squad” was optioned by Warner Bros. He spent over a decade tracking down surviving members of the real police unit as well as families and associates of the mobsters they pursued.

Gangster Squad is a tour-de-force narrative reminiscient of LA Confidential.

What listeners say about Gangster Squad

A few good things about this is the writer did an amazing amount of research, he also notes when stories he has can contain hyperbole or be untrue. The characters are all good characters to hear about especially the Whalen family.

Really one of the boring parts was Mickey Cohen sure he was interesting till he went to prison the first time, after that he seems just like a has been and the story could have been better suited towards other things the intelligence division did.

The origins the writer goes back to are excellent he mentions the fruit cart selling black hand people and details how in the early days LA was the wild west and was notorious for corruption. It is a great overall read.

Loved it, great narration, great author, and great characters in the book. Hope there's a sequel!

Very enjoyable story, if you like cops & mobsters. I enjoyed that Lieberman didn't glorify these thugs - especially Mickey Cohen. That's one of the things I hated about "The Sopranos". These are low lifes who ruin the lives of mostly innocent people by praying on the weaknesses. Example: Mickey Cohen owned a florist and he would send out his delivery people with floral arrangements to homes of some of the citizens of Los Angeles. The problem...these people didn't order flowers. Of course Cohen's named would be on the receipt and since he was a well known "celebrity"/gangster (for lack of a better term) and fearing retribution they pay up. Nothing romantic about that unless you're a thug looking for new ideas to scam hard working citizens. It's the police that are the romantic character in this story. It's a wonderful story spanning the late 30's (with main character family stories dating back to the 1880's) thru the early 1960's (again with main characters stories going up until present time). This story goes much, much deeper than the movie. I hope this entices some people get the wonderful audio book.

This is the story of the real gangster squad - I really enjoyed this production. It was interesting & very entertaining. Big thumbs up!

Would you try another book from Paul Lieberman and/or Robert Petkoff?

It is up in the air. I do not normally listen to non fiction. This book did grab my interest once I got past that the book was a historical narative of the years in LA in the police force.

It is a well written and well documented book that does not leave gaps in the telling of the LA police forces fight to keep the Mafia out of its City.

Easy to listen to. He is very clear in his reading.

Was Gangster Squad worth the listening time?

Initially I was unhappy as it claims to be the basis of the Movie. As with Band of Brothers by by Ambrose as opposed to the HBO series it is not very much alike. Once I started to listen though, the book did catch me and I was not able to stop listening to it. Have truly enjoyed it. If you are interested in early Police history, LA or the Mafia this is a good book for you.

A good story delivered in a boring way. I tried but couldn't continue past the first few chapters. I'm sure the storey would be captivating but for the droneful manner in which it is read.

The fact that this is not a fictional world carved out of the imagination of the author may surprise you, the events, the people, the stories and the happenings are in any other part of the world a work of fiction. Surprisingly in the city of Angels of Hollywood it is all too real. Interconnected in a way only the passage of time can tell with stories that span a life time or more Gangster Squad weaves about in ways that make the most obscure details the most important.

A most enjoyable history book... or fiction for that matter