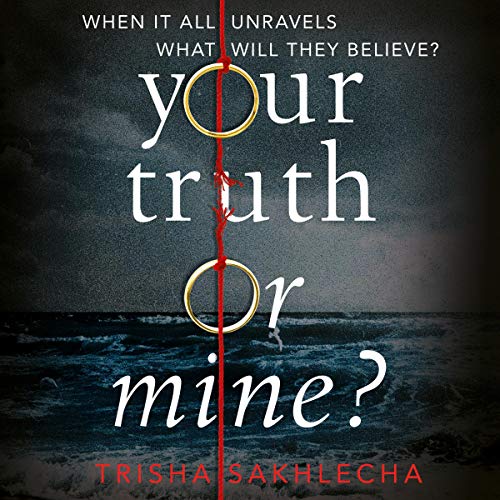 Your Truth or Mine?

Your Truth or Mine? is a debut psychological suspense title by Trisha Sakhlecha about the unravelling of a marriage and the dark secrets couples keep from one another, perfect for fans of Erin Kelly's He Said/She Said and Lisa Jewell's Then She Was Gone.

At their wedding Mia and Roy Kapoor promised to love and cherish each other. Whilst not perfect, their marriage is sacred and their commitment absolute. But a knock at the door changes everything when Roy is questioned over the disappearance of a young woman. As Roy and Mia’s life unravels, they must question everything they know about each other if their marriage is to survive. But what if the real truth is not what they, or you, think?

What listeners say about Your Truth or Mine?

Twists and turns to the end

A great read which keeps you guessing. Excellent narration from the 3 performers help to evoke the imagination.

Went on and on and on started slow And was in two minds whether to bother.

I actually quite enjoyed this book - decent story, good momentum (facilitated by three different viewpoints), and a nice weaving in of the characters' Asian background. There are some liberties, I think, that are taken within this genre, and I would say that many aspects of Ms. Sakhleja's book - whether dialogue or plot - should be considered within this framework. A good debut. However, for at least 50% of the book, I strongly contemplated returning it. While Avita Jay was lovely, the male narrator's performance was abhorrent (so sorry Ms. Jay - but even your narration could not prevent me from rating this based on your colleague). The main couple consist of an Asian husband and wife - the wife grew up between India and Bristol (and is half English), while the husband grew up solely in India. Yet, to anybody who has had any meaningful exposure to India (and maybe even if their exposure was lesser), it is crystal clear that Homer Todiwala did not grow up in India, and he has no interest in even feigning it. His accent when narrating for the male lead was insufferable enough, but I am guessing he and the director thought the British lilt to it was passable (or, alternatively, perhaps they gave it no thought); but the accent got even more ridiculous when Mr. Todiwala voiced the dialogue for other, lesser privileged/non-English-medium educated Indian characters (to say it was similar to Apu from The Simpsons would not be inaccurate). And do not even get me started on the pronunciation of Indian names/places or the Hindi dialogues (in fact, Ms. Jay, while narrating a character that was half-British, had pitch perfect pronunciation when it came to all things Indian, ironically). For the life of me, I could not figure out how Amazon could not find a single native-born Asian (India, Pakistani, or Bangladeshi would have done equally well) to voice for this character. It is a major failure not only on the part of Mr. Todiwala, but also on the part of Amazon and Audible (and this book is only one of many for which they have used the same narrator in an India-based context). And you could call it lazy, or ignorant, or whatever. But the utter and complete lack of care to get something so basic with respect to one half of the narrating team says something much more to me - to say it borders on racism would be kind, and by any means, it is downright shameful.

Felt like I listened to 5 separate stories in one!

Bit of a strange one this! I feel like I have listened to about 5 separate totally different books all at once and tried to get them to merge together and make sense, it should have stuck to one storyline and made it shorter!! one minute I'm following the main story the next it seemed to go into another random irrelevant story. It got to Chapter 70 odd and I lost interest and didn't even care how it finished. Roy Kapoor kept losing his accent throughout the book, and at some points (when it was a random part that didn't really relate to the story) I had to check I was listening to the same book. The first chapters seemed promising, was Roy, Mia"s cheating husband a murderer? but somewhere along the way, this was no longer the story and it just faded away along with Roy and forgotten. Mia doesn't have much luck. as typical in this genre of book, she has issues, hears voices, had a breakdown previously, has nightmares ( same old, same old ) A Cheating/ perhaps, murdering husband Betrayed by her good friend at work and sacked from her job Dying mother Dead Father or "daddy" Lied to by her sister and mother all her life Another one of her oldest friends a Male has also betrayed her in some way but I couldn't figure out what!! Mia was in the house with him, her life long oldest friend, remincising about their life long friendship and all the funny memories they shared (this all seemed to come from nowhere, I didn't know they were good friends throughout the book until this one chapter, but suddenly they were bezzies), him supporting her and helping her through all the awful things that she was going through, then she saw him in the background of a photo in a blind panic she ran away to her car, locked the doors and sped off. Then no mention of him or the situation or the relevance of what she saw, another random part that was just forgotten. The big reveal of who was behind it all was all a bit strange and just fell flat, but not to worry, it was over in no time ready to move on to the next irrelevant chapter. Hated the fact that Mia a grown, married, successful (at one point) career woman, felt the need to call her father "daddy" throughout the whole story, it got to the point where it was making me cringe and that alone almost made me stop listening. I also got tired of listening to Mia whine and bleat on and on about 'daddy's' house that her mother wanted to sell! another pointless part of the story, that led nowhere!

Absolutely loved this debut novel. It had me hooked from the first page and I couldn't stop listening. The plot is full of suspense and plot twists that had me gasping. I cannot wait to hear me from this author, its fantastically written and I didn't want it to end