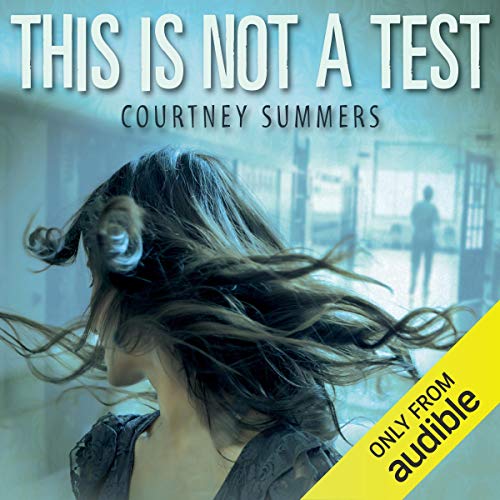 This Is Not a Test

It's the end of the world. Six students have taken cover in Cortege High but shelter is little comfort when the dead outside won't stop pounding on the doors. One bite is all it takes to kill a person and bring them back as a monstrous version of their former self.

To Sloane Price, that doesn't sound so bad. Six months ago, her world collapsed and she's failed to find a reason to keep going. Now seems like the perfect time to give up. As Sloane eagerly waits for the barricades to fall, she's forced to witness the apocalypse through the eyes of five people who actually want to live. But as the days crawl by, everyone's motivations to survive begin to change in startling ways....

What listeners say about This Is Not a Test

Could be worse. I liked the narator.

For about half the novel the characters are not doing anything. We're sitting and waiting.

How about taking stock? No, we didn't think of that.
How about trying to clear the area around the school? No, too dangorous.
How about a plan? No, I'm too mentally exausted to think even after my 18 days of no responcabilities.
Well, how is the stroy. Teen drama.
How are the characters. Good enough, they stick to their archtypes but not exessively.
So if you can deal with their characters lack of understanding of politics on small scales, their lack of logical decision making, and how most people are more experienced in what to do in these sonnario because of Corola and zombie media. Standard asking price for Zombie books, and you like Teen drama it's ok, I just like my logics. So from average to bad.

The narator was pretty good. You know who's talking by the narator's voice and the way she reads the contradictory thoughts is good. One character never clicked right with me with one word. The main character's name. He would call it out, and I would think she was hallucinating the father again. But no just Rhys. Oh well.

Honestly I perfer Live-School to this primarely because of the lighter tone because it knows that school kids with Zombies is stupied. Also, I think that's just my soft spot for puppies.

Zombie books are supposed to be exciting and on the edge of your seat while explaining how people evade the dangers and get to safety. This book skips all of the good parts. definitely a YA story. Repeating words for filler over and over was annoying. The narrator wasn't bad.

I expected this story to be more... Scary. That's what I wanted it to be, a book that truly scares me, but it mostly left me shocked and detached. While I thought the story telling was kind of bland, I was still engrossed enough to stay awake the entire night to finish the book. I thought the reader on the audio version did a wonderful job with the different characters, even though I couldn't like all of their voices. (Rhys.) I love how she read Grace!
Anyway, I guess the only part of this book that scared me was Sloane's own trauma and her distrust and disbelief at everything that's happened. That, and how easily something can go wrong, how quickly one can go in the midst of surviving for so long.

Too YA for me

This book was a little too young adult for me. The book really played on the tensions and interactions of the teen group during the zombie apocalypse rather than the actual apocalypse itself. As a result I didn’t really connect or like the characters, although the author does do a good job of making you feel sorry for/know where, Sloan, the main character is coming from. It was an interesting but didn’t have the normal action you would see in a normal zombie book.

The Performance was good, not great.

Omgosh. Where to start? Whiney main character, all the worst parts of Breakfast Club and Lord of the Flies and literally five words of actual zombies the rest of whining angst. Kill. Me. Now.

Update: I managed to finish this book and it stayed on brand. Literally wanted to feed myself to the zombies. And honestly God bless this author. They tried and they get a participation trophy.

If you’re over 23, you may want to just skip this.

Good read, even not knowing this is a book for young adults.

Wanted a good zombie book and this popped up as recommended. Not much action, however there were some great tense moments especially towards the final act. Happy with the ending.

I'm waiting to find out what happens, it was OK in the zombie themed stories go.

I am so depressed now.

No. I kept waiting for Sloane to have some sort of life altering moment of clarity and get off of her suicide mission. If I would have known she'd never snap out of it, I would have stopped listening earlier.

For God's sake, a little bit of joy! Even though she and Rhys connected, she still couldn't find a little happiness. In my opinion, the most effective stories are those that have more balance. A little light amongst the dark. If there were a few of those moments in the story, I think it would have been much more powerful and enjoyable.

What aspect of Stephanie Cannon’s performance would you have changed?

She did a good job for the most part.

Did This Is Not a Test inspire you to do anything?

No. It left me numb and depressed. Not good.

If you want to listen to a book about teenagers trying to survive and the main character being suicidal then great read this. If you want a zombie book then look elsewhere.

Would you ever listen to anything by Courtney Summer again?

No I would not read another book by Courtney Summers.

Dour it the best word I can think of to describe this book. This is not your traditional zombie book, the zombies are more a backdrop for a survival story of a group of teenagers, but that is not my problem with this book. The main character wants to kill herself throughout the entire book with no character development whatsoever, this I found just a bit boring and not really what I would choose to read a book about.

The performance is ok but a bit lacking in enthusiasm, although I am aware that this is probably because the narrator was trying to embody the depressed wanting to kill herself teenager, so I don’t think the narration was awful, it just fuelled my dislike.

Some people may like this book, but I can't get over my dislike for the story itself and no character development.