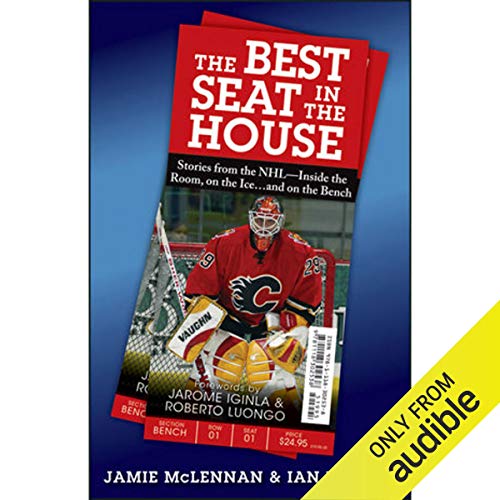 The Best Seat in the House

A back-up goalie's hilarious behind-the-mask look at life in the NHLJamie McLennan spent 20 years playing professional hockey. Sort of. As the backup for such legendary goalies as Grant Fuhr, Ron Hextall, Roberto Luongo, and Miikka Kiprusoff, he saw everything - except much playing time. In The Best Seat in the House, McLennan looks back on his unique career, from breaking into the NHL, to working with the legends, to life on the road and in the league, offering listeners an unprecedented glimpse into life inside the locker room.

Filled with tales of camaraderie and crazy antics, the book covers 20 years on and off the ice - including McLennan's disastrous meeting with Gene Simmons, accidentally calling Lady Gaga a troll to her face, charging an opposing team's mascot on the orders of legendary coach Billy Smith, and even how he hid a hotdog in his gear for an in-game snack.

What listeners say about The Best Seat in the House

Wish Jamie had narrated this!

Been wanting to read this one for awhile. I loved Jamie when he played for Florida. Nice to hear his story...only wish he had narrated himself!!

Observation from the crease &the end of the bench

Noodles does a great job of sharing the locker room & NHL player life with the listener. His message goes beyond the sport and surfaces the characters he shared this life with. Grant Fuhr & the gumball is priceless.

Not actually what I was expecting...

As a hockey fan (spelled "fanatic"), I was expecting more behind the scenes hockey anecdotes. More "insider trading information". What I got was a cute (?) story about Jamie's hijinx. Not a bad book...just not a great book.

hockey tales from the show...great listen

funny, interesting and insightful....a must for hockey fans! well worth a listen! 5 star listen.