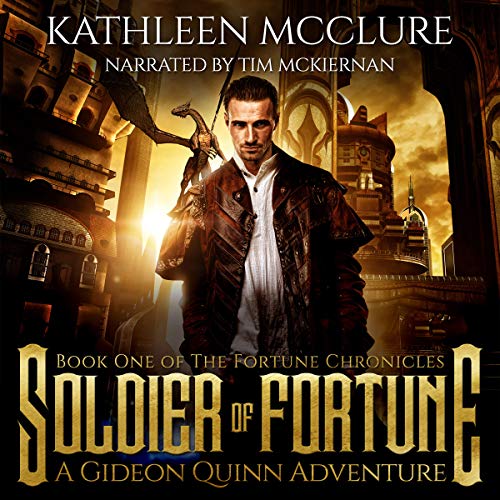 Wrongly convicted of treason, Gideon Quinn has spent six years harvesting crystal under the killing suns of the Morton Barrens, until the day a general of the Colonial Corps arrives with an offer of freedom, and the chance to clear his name.

Gideon doesn't have to think twice, and with his pet draco Elvis on his shoulder, he takes 'ship for the city of Nike in search of revenge - and justice. But mostly, revenge.

What he finds is a dodger named Mia, a city steeped in corruption, and a menace at the heart of the Corps which could bring Fortune's new and fragile peace to an explosive end.

And that's just his first night in town.

What listeners say about Soldier of Fortune: A Gideon Quinn Adventure

Make your fortune better, get this book

I hate to make a comparison, but I was looking for something to quell my Harry Dresden fix. Butcher had been taking so long to get a new book out that I had to start looking for things similar in nature, and that is how I found Soldier of Fortune. Quinn seemed to fith the profile. The setting is part fantasy, part sci-fi, part steampunk, and part urban warrior. I can honestly say that I had never seen a book like this before.

It has an amazing cast of characters, and as I said the setting is really special and unique. The main character, Gideon, really fills the bill of the hero we deserve and need, and the story is so pitch perfect one note of it could shatter glass; like, it could shatter bullet proof glass. I hope this becomes a long running series, as it will become a classic, I am sure of that.

Can I talk about Tim McKiernan? This dude rocks the narration like he had a Stratocaster in his hands. He really embodies each character, and he plays Gideon to sweet perfection. This guy is good. I'm going to have to keep an eye out for him in the future. For that matter, I'll be doing the same for McCLure.

A new hero in town!

Water Break Editor Error
I cannot believe this! In chapter 7 at approximately 10:01 minutes, the narrator actually stops to drink water!

This is basically a Vin Diesel or Dwayne Johnson type of story. The character is loyal, serviced his country, respected by his peers and has been framed.
Gideon Quinn is the protagonist. He is the wronged good guy who now must perform illegal things to find his justice. He was a captain in the service of his country. He has high morals and the respect of his troops. He was framed and took the blame of the crime to save others. Add a flying reptile, a pet draco named Elvis, a cute kid, Mia and the honest police officer, DS Hamm, those are the main characters.

Quinn gets out of jail and looks to extract revenge for the lives of his men that were killed. Quinn is a good guy and has the heart to save those in distress. He is paroled and everyone from his past and new enemies are after him.

I enjoyed the characters in this story and Quinn. Mia, Tiago and DS Hamm and would enjoy reading about their next adventures. Enjoyable execution of a predictable story.
I will not read the next in the series. It will not feature Quinn, Mia, et al, but other character introduced in the story.

This book! This book! All I can say is, wow! wow! and some more wow! This is testament to how amazing and epic this read was!

Such a great book and listen! Fast-paced with plenty of action and snark!

Well done to the narrator for doing an amazing job voicing the characters!


I was given this free review copy audiobook at my request and have voluntarily left this review.

So completely worth the wait!!!!

There were some audio issues with this first download but this listen was sooooooo worth the wait!!!

The story was incredible! That's not hyperbole. That's just the actual fact. From the first introduction of Gideon Quinn to the last delicious ending, this book was exceptional.

Gideon Quinn is the very definition of a hero: a person noted for courageous acts or nobility of character. There was no shortage of either with this listen!!

Gideon kept finding himself in compromised situations, not of his making, and even when down, was never out.

There are a variety of minor characters introduced but each and every one had depth and a purpose. I'm telling you, this book was seriously good.

The narration was outstanding. Again, not hyperbole, just the facts. This was my first Tim McKiernan listen but it certainly won't be my last. There were a myriad of characters and McKiernan delivered on them all. Seriously, this listen was like a radio drama!!!! Perfection.

The ending satisfied and then left me wanting more. I'm so glad there is a book two. I cannot wait to get back into this world!!!

LOVED listening to this book! Great world building and characters, Gideon and Elvis are my favorites. Fast-paced with plenty of action and the story kept me hooked. The narrator gave an amazing performance, changing accents and tone for each character. Will definitely be looking for more books in this series and I highly recommend giving this one a listen. I received a free review copy of this audiobook at my request and I have voluntarily left this review.

This was a good listen. The story was interesting and the pace was steady with a few action scenes. The narration was a bit choppy at first but got better as the book progressed. There were several recording mistakes but I was informed by the author that these should be corrected in the near future.

good enough to move on to book 2!

At first I had trouble with the narrator, but I grew to enjoy him. The story was darn good. I listened to it pretty quickly over about 2 days. Nothing explicit, just fun storytelling. Flashbacks were sort of distracting, but I didn't dislike it so much. Some really delightful characters that were easy to care about.

The story and the performance are great. Unfortunately, there are some editing 'artifacts' where problems were not edited out. These editing problems have a minor effect on the immersion in the story. The performance is great and otherwise worth 5 stars.

The world-building is awesome in this series. The timeline of this story intertwines with the second book in the series enriching both stories and really fleshing out the world building. The flashbacks are handled well and are done in such a way that the mystery is preserved for as long as possible. Each character is distinct and unique (even the minor ones) with a backstory that is evocative and again enriches the world-building.

I highly recommend this anyone interested in far future, other world, alternative history, and steampunk.

I am looking forward to continuation of this series.

i really liked this one

totally liked this book, stumbled into it, glad i did
character were very likable, i am totally hooked
hope there will be more

A Soldier and a Gentleman - bring on more!

Great story by Kathleen McClure full of intriguing characters brought to life by Tim McKiernan. Gideon has spent years in prison for a crime he did not commit. He is a good man and took the blame for an incident. Now he is out and looking to absolve himself and get revenge on those who have wronged him. Kind of a standard story when you whittle it down so, but the story itself and the characters just live in your mind as you listen.

I did do a double take because at one point, the narrator actually stopped to take a drink of water! The editor missed that!

I almost gave up on this about 45mins in. A positive blizzard of characters and voices made my head spin. Patchy sound quality and sub-standard editing throughout doesn't help.

Notwithstanding all that the book actually develops into quite a good story with likeable heroes and satisfyingly nasty villains.

I'll get the next one if it comes out on audio, but hopefully the production quality issues can be addressed.

A great start what happens next?

The story is an engaging story, plenty of action and a pinch of mystery with well-written characters in an interesting world that I would like to know more of, a war in its past, strange technology, keepers and best of all Elvis the Draco what not to like.

Gideon Quinn is a likeable character despite all his flaws his journey from the start of this story to the end as well as the flashback to his past made an interesting listing experience.

The narration is good, clear, easy to listen to and all the main characters are very well voiced with unique voices and clear emotions. The audio quality is good but there are a few times when a line is repeated.

Well worth a listen and I can recommend it. I look forward to listening to the next one.


I was given this free review copy audiobook at my request and have voluntarily left this review.