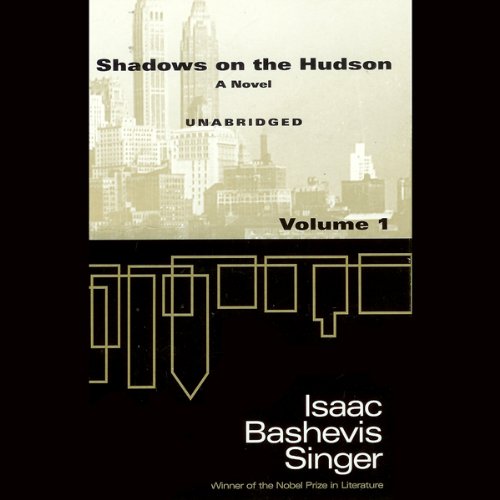 Shadows on the Hudson, Volume 1 (Unabridged)

The late Nobelist's masterpiece takes a candid look into the lives of Holocaust survivors during the late 40s. Set in New York City, Shadows on the Hudson, Volume 1, the first in a four volume audiobook series, draws us into the intertwined lives of a circles of prosperous Jewish refugees.

At the center is Boris Makaver, a pious and wealthy businessman. His greatest trial is his daughter, Anna. Unhappy in her current marriage, she plans to escape with Hertz Grien, a man torn between ascetic yearnings and romantic entanglements. From Makaver's gloomy Upper West Side Apartment to the pastel resorts of Miami-amid family quarrels, zealous religious debates, crooked seances, and a myriad of affairs and marriages-Singer weaves a rich tapestry of American Jewry. Despite the characters' fervent and often ironic attempts to decipher life's enigmas, their questions remain, for the most part, unanswered. This darkest of Singer's tragicomic novels was originally serialized in the Yiddish language publication, Forward, in the 50s. Now, finally, in its first English translation, it is revealed to be one of his major works.

What listeners say about Shadows on the Hudson, Volume 1 (Unabridged)

Masterpiece but ripoff by publisher--4 credits????

If you're a Singer fan you will love this book, and the performances by these great actors truly bring it to life. At first I didn't like the idea of 3 narrators because it was distracting, but I quickly got used to it. The opportunity to listen to a Singer book I hadn't read, narrated by three great actors, two of whom are favorites (Bikel and Harris though Rubinstein is fabulous as well) is why I sprung 4 credits for this ONE book that the publisher greedily split into four volumes, although it's a terrible ripoff. I actually contacted Phoenix Audio, the publisher, months ago, and was told they are reviewing their audiobook policies but they haven't done a thing about it. Audible was kind enough to refund me 2 credits on this. I just had to hear it and wasn't sorry -- I loved it. I tried reading part of it to save a credit, but it's tough going--the theme of how to be a Jew after the Holocaust is pretty depressing--but the narrators make all the difference.