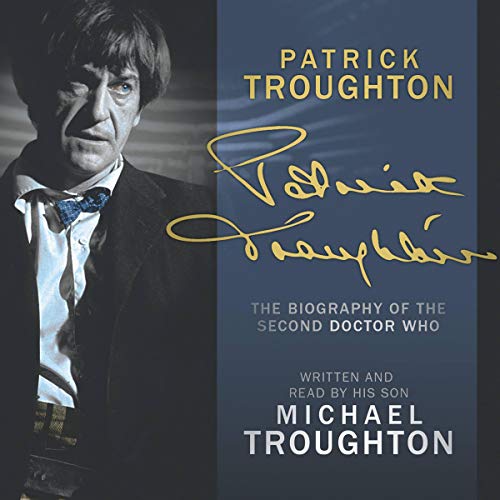 Respected and loved, Patrick Troughton is probably best remembered as the second Doctor Who - a role in which he made television history. A prolific actor, he was also a complex and troubled man, constantly wrestling with two lives, one of which he was determined to keep secret.

Michael Troughton presents here an entertaining and personal account of his father’s professional and private life. Meticulously researched, he explores Patrick’s childhood, his experiences at sea during World War II and the successful acting career which led to his historic casting as Doctor Who in 1966.

Patrick’s Doctor Who years are recalled in vivid detail, from his initial uncertainty about taking on the part through the legendary 'monster year', to his troubled final season and three subsequent returns to the role.

In this fascinating biography, Patrick’s extraordinary career and his multi-layered personal life are enhanced by the memories of family members, actors, friends and colleagues. Michael peppers the book with revealing extracts from Patrick’s own diaries. This audiobook is an honest, affectionate and complete account of Patrick Troughton the actor, and Patrick Troughton the man.

What listeners say about Patrick Troughton: The Biography

A fascinating and really informative biography of the Character Actor Patrick Troughton. Written and narrated by his son who does a perfect impression of his father's voice, whenever quoting his words or letters. It is a really interesting insight into his life, his career and acting technique and also an intriguing study of a man of contradictions. Highly recommended and a must for Doctor Who to series fans as well but great for anyone interested in British theatre, and the early years of British Cinema and television.

'Must hear for Whovians.

Michael Troughton's voice is simply a delight - with subtle, yet convincing shifts when speaking for himself, his father, or a host of other characters. The text is an honest, yet compassionate and respectful memoir of a complex and somewhat undervalued artist.
Thank you for allowing us to know your father better. It only makes what he did all the more magical

A very kind and gentle appreciation of a father by his son.

A very enjoyable sharing of his fathers life by his son. Told with love, kindness, and appreciation. It held my interest straight through, and was over too soon, as was PT.

A great deal of information about PT during his Dr Who time that fills in the holes. I will rewatch some of the episodes with better understanding and appreciation.

The difficult and painful parts are told with exquisite kindness and compassion.

I have never read or heard any memoir like it, because it is as much the son’s memoir as the fathers biography.

I was throughly entertained whilst listening to this. I would highly recommend this to anyone who is interested in Patrick Troughton, Acting, film and theatre.

A brilliant insight into a much-loved actor

Would you consider the audio edition of Patrick Troughton: The Biography to be better than the print version?

As a fan of audiobooks and of Doctor Who I was delighted to listen to this. Read by the Author it offers insight, warmth and humour without descending into sentimentality.

A lovely book about the life of one of Britain's most loved actors. Written by his son it is a book that offers insight and honesty, and its frankness is one of its best features.

took me back and Michael's voice returned his dad to my imagination. really enjoyed it.

A wonderfully intimate insight into a great actor.

Michael Troughton has painted an intimate,warts-and-all, picture of his father’s life. The letters and diary entries that Michael reads out in his father’s voice are spookily reminiscent of the great man himself. A wonderful and poignant listen.

It Puts A Smile On Your Face

Absolutely wonderful.
I'm a massive fan of Patrick's, and I've pretty much been on a spree of watching his filmography this past year, and he truly is the most wonderful actor I've ever come across. I've watched a lot of interviews like the Myth Makers series, and convention interviews where Frazer, Deborah & Wendy have talked about their happy times with him, but listening to this audio just opens you up to him a bit more. If anything I think it's made me love him more than I did already, which I didn't think was possible. Michael speaks very clearly, and really does sound just like his Dad when he does this voice which is really lovely as well.
Honestly I couldn't praise this audio enough. I'd recommend to anyone who's seen Doctor Who, or even just seen a few of Patrick's shows. It certainly makes a good listen. <3