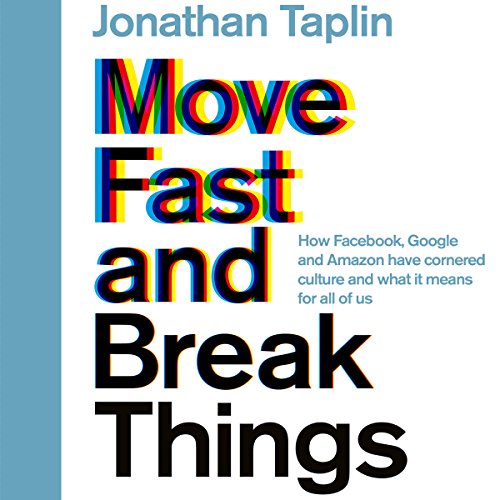 Google. Amazon. Facebook. The modern world is defined by vast digital monopolies turning ever-larger profits. Those of us who consume the content that feeds them are farmed for the purposes of being sold ever more products and advertising. Those that create the content - the artists, writers and musicians - are finding they can no longer survive in this unforgiving economic landscape.

But it didn't have to be this way.

In Move Fast and Break Things, Jonathan Taplin offers a succinct and powerful history of how online life began to be shaped around the values of the entrepreneurs like Peter Thiel and Larry Page who founded these all-powerful companies. Their unprecedented growth came at the heavy cost of tolerating piracy of books, music and film while at the same time promoting opaque business practices and subordinating the privacy of individual users to create the surveillance marketing monoculture in which we now live.

It is the story of a massive reallocation of revenue in which $50 billion a year has moved from the creators and owners of content to the monopoly platforms. With this reallocation of money comes a shift in power. Google, Facebook and Amazon now enjoy political power on par with Big Oil and Big Pharma, which in part explains how such a tremendous shift in revenues from creators to platforms could have been achieved and why it has gone unchallenged for so long.

And if you think that's got nothing to do with you, their next move is to come after your jobs.

Move Fast and Break Things is a call to arms, to say that is enough is enough and to demand that we do everything in our power to create a different future.

What listeners say about Move Fast and Break Things

Unfortunately much of the facts listed are just one mans idealism. I was disappointed that Johnathan was unable to take a forward view but rather talk about how the world was 50 years ago and complain that things have changed. Very little understanding of tech and the challenges involved.

I weened myself off Facebook as a result of reading this book and have started using (or at least trying to) more anonymity online.

Very well researched and a great read for the lover of tech anti-trust.

A revealing account of how techno giants manipulate and control our world usurping everything on their way.

Worth a listen and a think!

I disagreed with a lot of what was said in the book.

Really enjoyed it though and would recommend it!

Too much focus on what happened rather than why & how

Some interesting topics but I felt the focus was too heavily on what had happened and why this was bad, rather than why it had happened and what could be changed. The sections where the focus shifted in this way were most int resting but needed to be more frequent.
Given the author’s close personal experience, elements felt like a personal gripe rather than a critical assessment.

Whither humans, arts & culture in TechTopia??

Does the specter of mass unemployment loom ahead for humanity as 47% of jobs will disappear in the next quarter century because of what a 2013 Oxford University study of 702 occupations termed as “computerisation”? Or are we headed towards a wonderful future, with 6 billion humans shed from the burdens of working and instead engaging in arts, culture and scientific discoveries, as tech visionaries like Marc Andreessen would have you believe?
Jonathan Taplin, who references the above study as well as an interview of Andreessen, firmly believes that its time to worry – and take a stand. He tears into the characterization by the latter of worries about growing unemployment as simply a matter of “reskilling” of workers – suggesting that only someone as rich, and hence out of touch with the common man, as Andreessen can think that a 50-year-old oil technician can simply reskill, learn coding and work for Google when he loses his job.
“Move Fast and Break Things” is a broadside against big tech, as a threat to democracy and cultural values. The growing role played by technology in everyday lives have been examined in quite a few books recently, although those generally focus on either the risks people take with allowing tech too deeply into their lives (broadly termed cybercrime) or are visions of what a future brave new world is going to look like. Taplin’s book worries about the socio-cultural impact, flowing in part from the economic impact of the growing dominance of a few tech giants which is the gist of his arguments.
Citing data showing that inequality has increased significantly in the US (and around the world) in the past 25 years, the book holds tech monopolies and near monopolies as a major factor in creating inequality. Rules that apply to normal companies such as anti-trust, monopolies, taxes - don’t apply the same way to internet companies, as internet entrepreneurs have convinced successive governments that these will come in the way of “efficiency”. The result is a few outsized winners, and many losers.
The problem is that the internet is particularly good at creating monopolies or duopolies as scale is easily achieved. An example of this dominance - Google’s Herfindahl-Hirschmann Index score in the online search segment is 7200. Regulators usually consider markets with HHI of 1500-2500 to be moderately and >2500 to be highly concentrated. The book contains numerous examples to illustrate this fact and its negative fallouts, whether it’s the slow death of traditional magazines and newspapers as online advertising sucks away their ad revenues, or Amazon leading to a shuttering of bookshops, small publishers as well as mom and pop corner stores.
Taplin’s bigger argument is socio-cultural, that society has put tech innovators on a pedestal and is not paying attention to the enormous costs their mode of thinking inflicts on societal cohesion, while almost exclusively celebrating their successes and innovations. As someone from the media and communications industry, he is a passionate believer in the value that artists of all kinds bring to society, something is being sharply eroded by the high concentration levels we are witnessing. He cites examples from personal experience to show how the music industry, or the film-making has changed, and how the artists are actually much worse off in the new regimes.
With insights into the thoughts of various Valley personalities, and their visions of tech driven Utopia, Taplin suggests that their underlying belief is that of a government hands-free libertarianism as espoused by Milton Friedman and Ayn Rand. As he points out, these people forget that the internet was started through government funding, and the initial idea of the internet’s early pioneers, such as Tim Berners Lee, was to democratize and equalize everyone, not to create more inequality. In similar vein, he highlights the internal contradictions and personal and professional moultings of Peter Thiel, the founder of PayPal and spawner of the “Paypal Mafia” (those who worked at Paypal and went on to found Yelp, Linked, Youtube, Palantir, etc.)
There is a lot of merit in the central arguments which bears thinking about, but the book also suffers from various flaws. Stylistically, there are simply too many quotes! At times chapters feel like assemblages of quotations. That is not to say that he doesn’t have his own mind; he does marshal and furnish various views primarily to support his hypothesis. However, the constant intrusions of quotes make for a jarring reading or listening experience.
His personal experience in the media, entertainment and communications industry make his views on them most authentic, and make his suggestions innovative and positive (such as artists cooperatives much like the Californian orange farmers’ cooperatives to combat Youtube and improve film-making). And it does appear that things have gone off-course a fair bit, whether it’s what we read in the news about Peter Thiel’s increasing megalomania, or of the scarcely believable words of Andreessen considering his Netscape was the first to cry bully at Microsoft in the late Nineties.
But it’s not as if concentration is a problem exclusive to the tech industry, as the author himself acknowledges when he quotes (yes, again) Elizabeth Warren stating the growing concentration in industries as diverse as airlines, drugstores, and health insurance. This suggests that there may be larger factors at play in the American economy.
Finally, apart from the above innovative suggestion for the film industry, Taplin has no positive recommendations to offer other than government intervention to break the monopolies. And here lies the second flaw – the views are US-centric, but while they apply broadly to the world since these same companies dominate these fields in most countries, there are notable exceptions such as China. Knowing the Chinese government’s authoritarianism and the local tech giants’ willingness to abide by government diktats, their state is likely to be even worse. And the recommendations of this book are likely to hamstring one set of American companies against essentially Chinese competition for everything future tech related.

makes you think. breaks ground. moving. worth the time and gets you wondering about how to make change.

thought provoking and worrying, with statistics, quotes and insights that call many internet based systems and products into question and requiring proper solutions in order for the internet to remain a free, fair and democratic space for humanity to flourish.

extremely factual, but with a well formed view on the real world issues being caused be the magnetism of the online giants, in decentralizing money and their monopolizing of content.

surely the regulations have to come.

Great for falling asleep without learning anything

It's really impressive how such an interesting topic can be explored in such a dull way.
The narration makes it's very hard to keep interest in the book, and has a power depressing effect.

An excellent, well reasoned discussion about the current cyber monopolies in the world and their potential for harm.