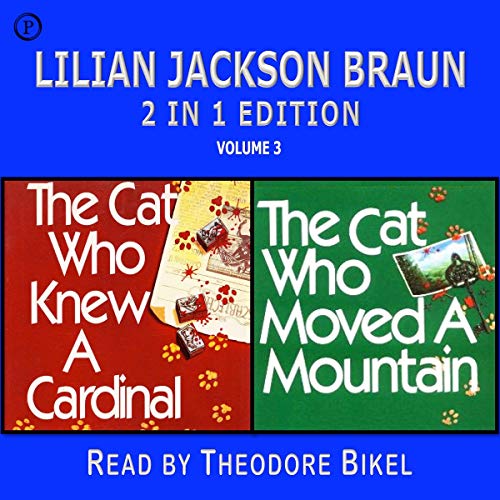 Phoenix Books brings together two of Braun's best mysteries in this Volume 3 in the series of 2-in-1 editions, featuring:

The Cat Who Knew a Cardinal: When the director of the Pickax Theatre Club's Shakespeare production is found dead in Qwilleran's apple orchard, Qwilleran and his Siamese sleuths must discover which player staged the murder.

The Cat Who Moved a Mountain: On vacation in the Big Potato Mountains, Qwilleran stumbles into a mystery involving the murder of J. J. Hawkinfield, the developer who was pushed off a mountain years before after announcing his plans to develop the region.

What listeners say about Lilian Jackson Braun 2-in-1 Edition, Volume 3

Not the full books

I was very disappointed to learn, after I had downloaded, that this is only 6 hrs and 1 minute. When looking at the individual books, 6 hrs 34 mins and 7 hrs 9 mins respectively, I realized this must be a condensed version. Didn't even bother to listen as I want to hear the full story.

not the same without George Guidall

I love the Jacksons stories with the two Siamese cats always a pleasure. just helps one unwind and relax but something is missing without the George woodall narration

I hate his voice

the person narrating this book is horrible. no depth, pitch, or flexion. Do not buy

A purrfectly satisfying mystery. Has me feeling like I'm sitting around the campfire with old friends.

Too short and not a good great listen

I bought this to save money. However, the narrator's voice, while a good voice, doesn't fit in these books.