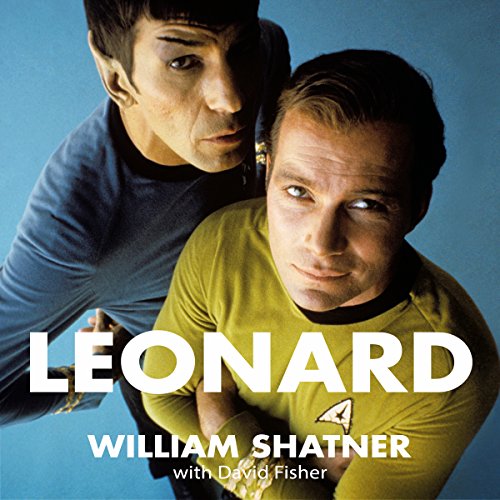 Leonard Nimoy and William Shatner first crossed paths as actors on the set of The Man from U.N.C.L.E. Little did they know that their next roles, in a new science-fiction television series called Star Trek, would shape their lives in ways no one could have anticipated.

In 79 television episodes and six feature films, they grew to know each other more than most friends could ever imagine.

Over the course of half a century, Shatner and Nimoy saw each other through personal and professional highs and lows. In this powerfully emotional book, Shatner tells the story of a man who was his friend for five decades, recounting anecdotes and untold stories of their lives on and off set as well as gathering stories from others who knew Nimoy well, to present a full picture of a rich life.

As much a biography of Nimoy as a story of their friendship, Leonard is a uniquely heartfelt book written by one legendary actor in celebration of another.

Read aloud by William Shatner, this audiobook is a deeply felt tribute to friendship.

What listeners say about Leonard

Theres a lot of content in here also in Shatner's various biographies so i feel like i know him in-depth. I believe it to be a deep tribute to his best friend, so fascinating learning more about Leonard and his rise to fame. My husband was like WTF are you listening to? Is this all about Spock?!! But i just love shatners voice, its so relaxing.

Very much enjoyed this. Leonard Nimoy was a very talented man and the friendship between them was like a brotherhood.

Brilliant book, William Shatner is a legend, as is Leonard Nimoy. Amazing stories, and research has been done to give the reader a glimpse into his life. Sad to hear from Shatner’s perspective the final years of their friendship. Must listen for any Trekkie like me. LLAP friends

Emotional, evocative and powerful. Bill Shatner's performance was wonderful & I will treasure this audiobook.

I was both sad and enriched at the end. Excellent.

Listening to William share his story of Leonard, their friendship and journeys through life, was a wonderful experience of sadness and joy. For a period of time I was able to reflect in life with reality and perspective, something I haven't done in many years. Thank you for sharing this story.

Wonderful to listen to

Highly recommended to those interested and fans alike. This book is filled with so much joy and emotion. Shatner reads this wonderfully and you get a real sense of friendship and a life long friendship. absolutely beautiful to listen to. LLAP Mr Nimoy

William Shatner is actually quite an accomplished straight to the heart writer. And in writing and reciting the emotional bonds between himself and Leonard Nimoy, this isn't some cynical cash in upon their friendship. This is indeed a loving testament and epitaph to the 50 year association that they were luckily enough to share and enjoy right from their first teaming up upon Star Trek. It's therefore a great pity that some fellow cast members of Star Trek could never quite see what Leonard Nimoy undoubtedly did from the start. That acting ego's are often born out of insecurities. And that William Shatner's saving grace away from the fragile spotlight was always going to be his self mocking sense of humour and an admission and an open willingness to see the other side of the story if for some reason he had become blind sided to it. So all I can say is this: Even if you're not a Star Trek fan, than just revel in this very human experience of a life affirming man sharing his virtually life long friendship to another man his life now utterly misses.

What other book might you compare Leonard to, and why?

Have you listened to any of William Shatner’s other performances? How does this one compare?

Yes - Always draws you in.

Just the gaps that our left in your own life, when a good part of your life leaves.

A good listen that's good in quantifying any expression of a deep friendship. And how good friendships should be cherished and not allowed to become passing ships in the night.

Bill Shatner gives an insight to the life of Leonard "Spock" nimoy and share his life,loves and loathes of their friendship.
well read, albeit a bit short, but easy to listen to.
love star trek? this'll be a nice audio book for you.

An emotional, thoughtful tribute by Bill Shatner to the wonderful Leonard Nimoy. It reminds me how painful it is to lose your heroes but how glad you are you had them. LLAP

amazing reflection of ones own life

found the narration made this book very boring. I had to strain listen as I felt it was very mumbled. As a Trekkie very Disappointed.

Thoroughly enjoyable. The first hour is hard work if you're not familiar with the story of the American television revolution of the 50s and 60s but it's worth sticking with it. Overall it's a beautiful story of one man's life and career as told by a good friend who wanted us all to understand him a little better. I'd recommend this to Trekkies, aspiring actors or people who just love a well-crafted biography. :-)

A look into the life of an outstanding actor, brilliantly done and told by shatner

"I have been and always shall be your friend"

That quote from the 2nd Star Trek film sums up the 50 year relationship between Shatner and Nimoy. This book affectionately brings two lives together, in honest revelation and memory.

Couldn’t put it down. Bill Shatner is a legend, and he pours his heart out about his friend. Love Bill, love Leonard.