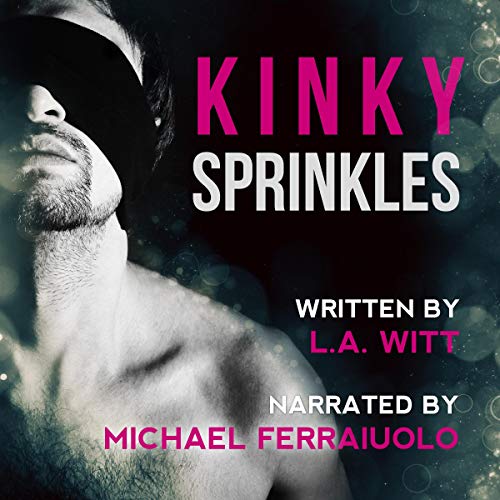 Their biggest challenge is balancing one's vanilla with the other's kink.

Joel has finally walked away from his abusive ex and is ready to meet new people. But that isn’t easy for a guy who’s shy, self-conscious, and struggling with his body image.

Andre has wanted Joel since the first time he laid eyes on him, and finally Joel is single. But Andre is a Dom and a sadist, and Joel is unapologetically vanilla. There’s no happy medium - either Andre reins in the kinky side that took him years to accept, or Joel grits his teeth and subjects himself to kinks that aren’t his thing. No matter who bends, someone’s going to be unhappy.

They agree to walk away, but they keep circling back to each other. Though their kinks might not line up, the chemistry between them sizzles and the emotional connection keeps getting deeper. But none of that will get them anywhere if they can’t find some kind of middle ground in the bedroom.

What listeners say about Kinky Sprinkles

A fantastic twist on kink

I'm terribly hard on kink books, because most of them are written by people who don't get it. Witt gets it. First her The Master Will Appear was wonderfully done. Now Kinky Sprinkles.

When I saw this audiobook was only 4 hours, I didn't see how such a complex storyline would work. It didn't seem long enough. And yet... it did. The entire storyline was there. It wasn't rushed. And both Joel and Andre came through clearly.

I don't want to say too much as I don't want to give it away, but the way Witt wrote the ending made me cheer. I kept wishing for that eventuality and the author came through in a big way.

If you're looking for heavy kink, you're not really going to find it here. Just bits and pieces from what Joel views and a few kinky sprinkles. But if you're looking for a nice tale with two men who have two completely different needs finding a way to make that work? So worth it.

And, let's face it. It's read by Michael Ferraiuolo, so even if the story wasn't fantastic - which it is - his voice alone would make it wonderful to listen to.

as great as the ebook

The story is always full stars, because if I wouldn't like the story as ebook, I wouldn't listen to the audiobook.

The performance from the narrator is also very important for me. I can't listen to a lot, because my English as a non-native-speaker isn't so perfect to follow a whole story over hours, when the narrator speaks too fast or too sloppy. Normally I have to SEE the person, who is talking to me in English. Michael Ferraiuolo is one of the top 5 narrators for me, I can listen without break and have no problems to follow.
I'm just not yet finish with the book, but I listen enough to give a review.

5 stars for the narration by Michael Ferraiuolo

Kinky Sprinkles is a standalone MM romance by LA Witt and is narrated by Michael Ferraiuolo. I’ve read several books by LA Witt and this one proved to be just as yummy as the others. Things I loved: Andre and the BDSM aspects (particularly that it was all about safe, sane and consensual). I wasn’t 100% sold on Joel. I get that he has had a bad experience, and that bad experience may make you more inclined to hold back in a relationship, but I don’t really see how someone can be kinky and then suddenly not. You are either kinky or you’re not, and if you are, then that doesn’t change because it is a part of your makeup (well unless you are Christian Grey or Joel apparently). All that being said, I enjoyed the story and I loved the chemistry between Joel and Andre, so I was okay with ignoring the bit that irked me.

This was my first book narrated by Michael Ferraiuolo and it will definitely not be my last. His voice is so smooth and I loved how he gave Andre and Joel very different tones. I could visualize the characters just by how they sounded, and I could hear the vulnerability in Joel’s voice, which reinforced just how much damage had occurred in the previous relationship, while Andre was soothing, yet commanding. It was done so perfectly, that I immediately knew who was speaking and never lost track. I also really enjoyed his female voice.

If you like short, MM reads with two characters who are both beautiful, and vulnerable, then this one should be added to your list ASAP.

I'm into some Kinky Sprinkles!

Wow! This was amazing! Super hot sex scenes paired with Michael Ferraiuolo's voice make this book incredibly sexy. If you like a little bit of kink and books where the MCs actually communicate like adults this is the book for you!