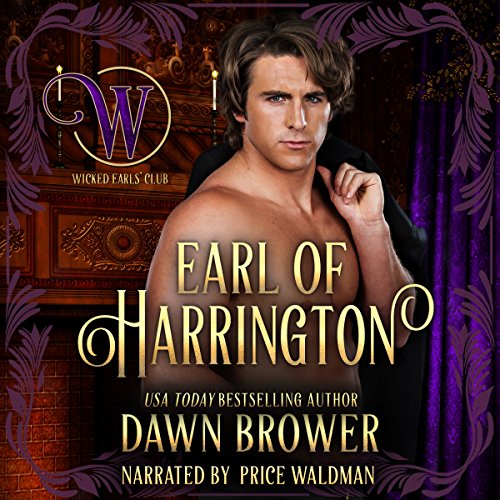 Jonas Parker, the Earl of Harrington has no desire to marry. He rather enjoys being unencumbered, and a wife would complicate things. The Wicked Earls’ Club is his haven, and he isn’t ready to give it up for matrimony. His grandfather, the Duke of Southington wants nothing more than to see him wed and return to the fold. For that reason alone, he’ll avoid proper ladies and wedding bells.

Lady Marian Lindsay rather likes being a spinster and embraces her bluestocking ways. She's studying to be a physician and wants to be a proper doctor. She longs to be taken seriously in the medical field, but her efforts go unnoticed. After careful deliberation she devises a scheme that is foolproof, but she needs the help of one of her father’s friends to make it happen.

Harrington is appalled at Marian’s request and refuses outright; however, she somehow manages to charm him into saying yes. Before he realizes it, he’s escorting her to Kent and a house party made of his worst nightmares. Propriety must be met at all costs because he will not be wed at the end of her expedition - or will he?

What listeners say about Earl of Harrington

Wishing to be a Doctor

Hoping to get into the medical school so she could be a Doctor, she needed to ask an Earl for permission.
No, was the answer, not fit for a woman. So disheartening! Then she hears of a woman who is holding a week house party and may have solutions to her questions. This love story was short but well read.

On that note, I LOVED this story! While I’ve read/listened to plenty of historical romances, this was one of the few involving a lead female character who spoke her mind. I loved her interactions with the male lead; the two were very comical at times.

This was my first time listening to this narrator, and I feel he did a pretty nice job! It’s so much better when the narrator has a natural accent that fits with the story. There’s no “obviously pretending to have this accent”, so there’s no way to mess it up by mispronunciation words.

I’d recommend this book to others who are fans of historical romances.

This was a well-written clean Regency. Lady Marian wants to be a physician. Jonas is a rake with conservative views toward women. This was a fun love story with lots of great sparring dialogue between the two. We experience the slow burn, waiting for that first kiss that makes them both realize they may need to revise their thinking. Throw in a devious old grandfather that Jonas would prefer to disown, best friends that have each others back, and a duchess with a mysterious background, and you have an entertaining Regency with humor, action, and true love.
This is the last of the Wicked Earl series, but now I'm checking out Brower's time travel series, Linked Across Time.
The narrator did a wonderful job. He has a lovely voice that instantly makes you think of breeches and a waistcoast.

The Earl of Harrington

Enjoyed the audiobook, it has an interesting story line. Enjoyed the characters and even dabbled in time travel. Would recommend

The Earl of Harrington's grandfather is really a bad seed. Finding a refuge in the Wicked Earls club proves to be the best thing that has happened to him in a while. Lady Marian is determined to be a spinster she cant help but feel a bit different about that when the Earl is around. The two have great chemistry and their friends bring a lot to the story. I think my favorite part is when I realized that Alys and her husband the Duke of Weston make an appearance in the book. They actually have their own series, but it was like visiting an old friend. The story was nicely written with a bit of action and fun. The narration is good, but the mispronunciation of certain words of the time gets a bit annoying.

Great way to end the series!

I’ve loved all of the Wicked Earl Series but this one was my favorite. Maybe because it was the last one or maybe because it was written by Dawn Brower but what ever the reason I just loved it. I read it the book first then listened to the audio version. Price Waldman did such a great job bring these stuffy old Earls to life. Definitely recommend this book

This is probably fine on sale or in the escape package to while away an evening, but the writing seems inexperienced, and I’m inclined to move on. I’ll give the author another try on one of her other books, because maybe it’s just me or it’s simply not grabbing my attention.

This story is about Jonas, who isn't ready to give up his current lifestyle for marriage nor to please his grandfather and Marian, who wants to become a physician more than anything else.
But of course, we know that none of these ideals nor goals are about to be achieved because otherwise this book would have no story.
I bet you can guess what happens, but you might be in for a few surprises when the story doesn't evolve the way you think it will.
I simply loved the two main characters with their very strong ideas and was rather pleased with the outcome.
It is a nicely written book that kept me guessing all the time and thus held my interest and attention.
Now Price Waldman has the type of voice I could listen to all day. Perhaps it is the deep bass that grabs me. I really do not know, but whatever it is, I loved listening to him in the audiobook version and my voluntary review is recorded above.

story has some weird twists, but a good story. great characters, that tie in to authors previous books. really like the narrator .

This is the first story I have read or listened to by Dawn and I can’t wait to read another book by her. Price did a great reading of the book and kept me engaged wanting to hear the whole book ASAP. Highly recommend to anyone.

Loved this historical romance! Dawn Brower is a new author to me and I will definetly listen to more of her book. lots of suspense and humor.