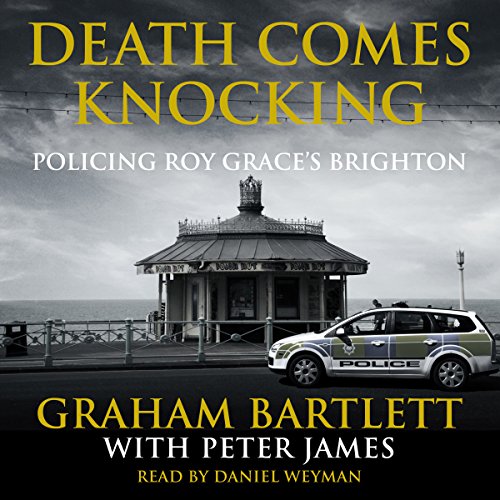 Fans of Peter James and his best-selling Roy Grace series of crime novels know that his audiobooks draw on in-depth research into the lives of Brighton and Hove police and are set in a world every bit as gritty as the real thing. His friend, Graham Bartlett, was a long-serving detective in the city once described as Britain's crime capital. Together, in Death Comes Knocking, they have given a gripping account of the city's most challenging cases, taking the listener from crime scenes and incident rooms to the morgue and introducing some of the real-life detectives who inspired Peter James' characters.

Whether it's the murder of a dodgy nightclub owner and his family in Sussex's worst nonterrorist mass murder or the race to find the abductor of a young girl; tracking down the antique trade's most notorious 'knocker boys' or nailing an audacious ring of forgers; or hunting for a cold-blooded killer who executed a surfer or catching a pair who kidnapped a businessman, leaving him severely beaten, to die on a hillside, the authors skillfully evoke the dangerous inside story of policing, the personal toll it takes and the dedication of those who risk their lives to keep the public safe.

If you like Peter James books then this is a bit disappointing. It is a conglomerate of crimes that took part in his books without the unknown. Became a bit too Police techniques and handbook style.

Excellent background to the Roy Grace novels and what it's like to be a policeman.

brilliant book. I found that this 'gelled' all the Roy Grace books- it gives the other real life accounts of the characters and stories in the books

Very interesting and good for all Peter James fans

If anyone likes reading stories by Peter James they will find this very interesting, so I recommend they give it a try

An excellent 'autobiography'. A real insight into the way the Brighton police force was led by Graham Bartlett and his numerous predecessors. Well worth reading!

This book might have been interesting if it wasn’t for the authors egos & alter egos . They seemed to be the main focus of the book. Really annoying .

Crime behind the scenes

An interesting and informative account of real policing of Peter James’
Brighton.
Truth can indeed be as strange and incredible as fiction.

Not an easy book to get into

I am very much an admirer of Peter James and his Roy Grace series but whether it be the narrator or the story, I found this book really hard to get into. For me, as a former police officer, very hard to get into

Really enjoyed this. Gives good insights into policing Brighton. Amusing in parts and moving in others. I've read all the Roy Grace series and am a fan of Peter James' but interjections relating to his books started to get a bit tiresome towards the end and felt more like plugs than adding anything to the book.

Can not think of anyone who hasn't read Peter James, due to the constant references to his novels

What was most disappointing about Graham Bartlett and Peter James ’s story?

If you could play editor, what scene or scenes would you have cut from Death Comes Knocking?

All references to Roy Grace novels by Peter James

Having read/listened and enjoyed all the Roy Grace books I thought it sad that Peter James felt the necessity to promote his novels in this way.