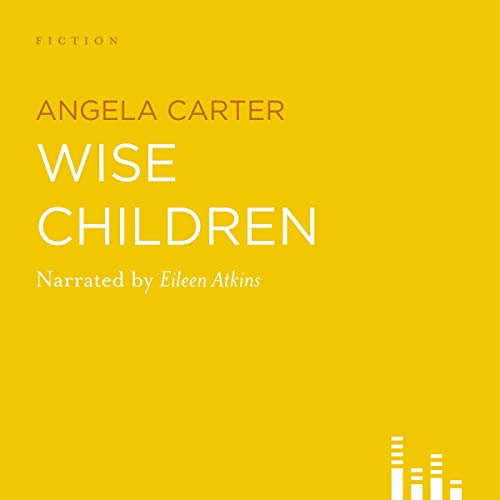 Nora and Dora, the 'famous' Chance sisters, prepare to go to their perennially absent father's 100th birthday party. With a wide and colourful, often rather crazy cast, the story veers off in a multitude of directions as Dora's reminiscent narrative slips from past to present suddenly and seamlessly throughout. The illegitimate 'bastard' Chance twins are the black sheep of the family. The all-singing, all-dancing, sweary, aging, make-up caked, high-heeled, bawdy, gritty and overall magnetic Chance twins, that is.

Never apart for long, the two are very much peas from the same pod: Sir Melchior Hazard, surviving head of a great acting dynasty, who is imminently to celebrate his 100th birthday. Packed with gags, tears, histories, mysteries, feuds and romantic (and some not-so-romantic) unions, 'Wise Children', like the Chance girls, doesn't miss a trick, and is jam-packed with all of the entrancing magic realism and nouveau-feminism that has ensconced Angela Carter so snugly in the canon of revered cult writers.

"What gives Angela Carter's carnivalesque 1991 novel a shot of new life is Eileen Atkins's superb characterisation. She is 75-year-old Dora, whirling the listener through the dancing, prancing lives of theatrical twin sisters, plus a whole cupboardful of fantastical family members." ( The Observer)

"What a bouncy and immediate new dimension audiobooks bring to books that are written with ebullience, firecracker wit and unstoppable pace." (The Times)

What listeners say about Wise Children

If you could sum up Wise Children in three words, what would they be?

There were a lot of characters and backstory, not such an eventful plot.

When the twin girls meet their uncle for the first time and he charms them with a magic trick.

When the twins met their real father and were not acknowledged.

I had a hard time keeping track of all the characters in the extended family and caring about them. The tone and setting were very unique, and made the book interesting

I absolutely loved this audiobook and was quite bereft when it finished. Not only does Angela Carter tell a fascinating story, but the narration was a perfect fit to the main character. There is a wonderful sense of time and place and I found it easy to imagine the different characters from the book itself and from the way they were voiced.
I highly recommend Wise Children and will be looking out for more Angela Carter audiobooks.

The narration of the story is brilliant I really enjoyed the characters the plot and the history.

Wickedly funny in places this story had me in tears of laughter and at times sadness. Overall the story is down to earth witty poignant - thoroughly recommended.

I loved this book and the performance was great, it was just a shame about the musical interludes as they were rather cheesy.

I'd like to see some more Angela Carter audio books. .. perhaps Nights at the circus?

The writing by Angela Carter is amazingly vivid with a great use of language. It creates a robust but decidedly unsentimental view of the post war period. The reading by Eileen Atkins is absolutely authentic. The voice, the phrasing and the timing makes it seem as though this is an intimate chat by the personality rather than an actor reading words. The book and the characters really came alive.

Eileen Atkins reading of this book is wonderfully atmospheric and is a joy. The story gives a good description of the world of music hall and its demise when television took over.

An entertaining novel made perfect by the narrator

One of the most enjoyable audiobooks I've listened to in the last year. Eileen Atkins' sly Cockney accent is perfect for the narrator, Dora, 75 year old cynical realist of the once-famous twin Chance Sisters. She manages to bring out every innuendo and irony of Carter's text as Dora relates the story of the Chance Sisters, their thirty-some years on the circuit in Britain and the US as a singing/dancing act, and of their relationship with the more famous Hazards, a great English acting family. The story is fabulous, over the top, funny, and endearing, and as told by Atkins, it's a pure treat. I loved every minute of it. Bravo!

What a great loss the quirky, brilliant hugely imaginative and humane Angela Carter was. I read this years ago when it first came out - but Eileen Atkins's pitch-perfect reading made me gurgle with delight. What a National Treasure she is.

Really enjoyed, listened to it within two days. the narrator chosen was a really good and fit the narrative well! Wish there was more by Angela Carter on audible!

What made the experience of listening to Wise Children the most enjoyable?

What phenominal characters! Each one just about believable but bizarre enough to push the story into the fantastic. Each meeting of the characters acts as a catalyst spinning the story in different directions but always taking the reader forward through the years.

Whilst deprived of the recognition of their father the main characters never lost hope. Their indominable spirit and innocent affrontery took the readers breath away at times but you were always left cheering them on.

The chaos of the final party cleverly brought all the protagonists together to receive their just deserts.

As the twins approached their birth father on his hundredth birthday the reader wanted his recognition for them just as much as they did.