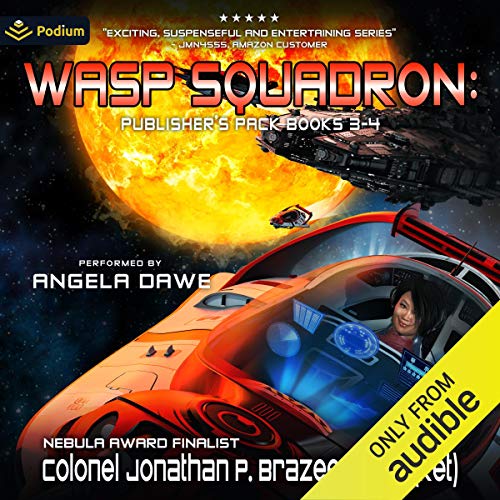 Alien Crystals don't recognize human boundaries; the Navy of Humankind has to hold them back. Small fighters in the vastness of space...the Joint Task Force Iron Shield stands ready. Too small to defend everywhere, they need intel so they can go on the attack and maximize their firepower...and their impact.

The Crystals do not know fear; they are coming for what they want. Wasp pilots are flying because they have to. Only they stand between the Crystals and humanity. Only the Iron Shield can stop the invasion. Be ready. They are coming.

The aliens arrived and they weren’t looking to make friends. Can Beth fight back the invasion? She has spent her career building a reputation. No one wants to mess with Beth when she’s behind the stick of her fighter, but this time, she’s not flying it. Can the Navy’s biggest badass ace get the job done without her tech?

Now, three years into the struggle, the aliens have made a statement. Blowing up a world has gotten everyone’s attention. The public is terrified, and the Directorate fears the worst. The galaxy needs hero, even if it comes in a small package.

Excellent Narrator. Opposite genders are notoriously a narrator's usual shortcoming, but this narrator handles male voices quite well. She also gives every character a different voice in keeping with their personality & status, making it easy to know who said what & who's who. That alone made for an enjoyable listen.

Add in a decent, what I assume is a YA, action story with a strong female MC who accomplishes unparalleled feats - though starting to push the envelope of believability in this book(s).

Don't think this will be too much of a spoiler, I hope. It's all in the details of how she accomplishes her missions, right? Well, you are forewarned.

In Pub. Pack 1, she's a kid from the "wrong side of the tracks" flying scouting missions for a corporation that makes 1st contact with hostile aliens. This brings her to the attention of a priviledged Fighter Squadron Navy Commander, catapulting her into - you guessed it - the Navy's #1 (& shortest) prized ace flyer, who pulls off feats none of her silver spoon feed brethren can manage!

Then I'm not sure exactly where 2 ends & 3 begins, I did listen to both Packs in a row, so sorry if my separations are a bit off.

There's this weird scene in Book 2 or 3 that seemed out of place to me, but that could be that I woke up in the middle of it, when I'd drifted off to sleep in a flight scene. It was disconcerting. It was reenactment of a historical Naval/sea faring ritual I've never heard of. Growing up on the water in New England, I was surprised I hadn't heard it before.
Rife with traditions, it's a fairly involved hazing that gives the lowly officers power over the high & mighty in some pretty graphic, gross & raunchy ways. It was beyond even what I'd imagine a college fraternity hazing to be like, so for me, did not seem like something you'd see endorsed on the dignified flag ship of a Naval Task Force, condoned & participated in by even the Admiral.

The author does use historical & cultural references in use now & it seems that this ritual may just be one of the more obscure ones. I always wonder when I read sci-fi, how realistic it is to assume that hundreds or thousands of years later, we'd be referencing Napoleon, the Spartans, Sun Tzu, Z, the Rolling Stones, Elvis, Coney Island hot dogs, & so on? It's something I've been paying more attention to in sci-fi lately. So that's just a curious side note on my part, because Mr. Breeze actually has used his historical references in a much more believable way than most authors do. The exception being this odd ritual. I'm not sure how it served the story, or maybe it seemed out of character?

Back to the Commander. He apparently has a special interest in his little pilot, which has not gone unnoticed. This makes for a romantic against all odds entanglement, that the prospect of pulling off, was apparently was even too much for the author, so he solved this quandry by killing off the elite & highly connected Commander in a heroic kamikaze sacrifice just when the mutual attraction has come to the attention of the naive pilot (who has harbored an almost unacknowledged spark towards him of her own). This makes for some good self discovery, growing up & awareness of how the world really works to further her character development.

Beth continues to riseto new heights with feats of daring do & against all odds for Books 3 & 4. Her acts grow in scope, as does she. She's carved out her own place at the top of the pilot pinacle, gained the acceptance of her snooty peers, resurected & recemented her friendship with her BFF & wingman, Mercy, a rich girl from the right side of the tracks, who just happens to not be anywhere near as good a pilot as her, but who has found true love in Beth's little brother & marries him, using the cliche of Mercy gaining the faimly love she always wanted but never had with her biological relatives.

Beth's "A little to much for swallowing" feats keep getting more fantastical, from becoming the 1st Ace in over 200 years, to in Book 3, saving her Carrier ship from blowing to smithereens, & in 4 to a brazen & impossible rescue on a human planet overtaken by ruthless aliens, (which may provide the key to winning the war), ending with her surviving the heretofore physically impossible, another 1st for our intrepid "can do anything" pipsqueak pilot, call sign Fire Ant.

Publisher's Pack 2 is considered books 3 & 4, like the 1st was 1 & 2, but length wise, seemed to be only a single book. Though each "book" was clearly a seperate story, I can't help but feel cheated with a recent trend of books being only 3.5-5 hours long, making a 2 book "publisher's pack" 8 or 9 hours, which is what I'd expect a Short Single Book to be.

Matter just me, but anything under 10 hours for a single seems like milking the mine, or more specifically, my pocketbook. Great scifi audio books used to be 12-36 hours long, averaging @14-20, so having at the extreme end, what used to be 1 book, now 6-9 books - well, that's about as hard to swallow as Beth's string of unprecedented, unrealistic accomplishments, IMO. (But, yes, I get author's have to eat & the proliferation of writers & self publications has made it much more difficult to stand out & flourish & all that. Still don't like it.)

I can't speak to the science of the series, some things seem a little off, like flying without your helmet on, or no flight suit, but I'm not an expert, nor even reasonably educated on the principles & science of believable space flight in the far planet colonizing future.

I got Publishers Pack 1 free thru the Plus Catalog, but used a credit to purchase Pack 2, which considering it was (just) under 10 hrs, is pretty high praise by itself. I had a slew of books lined up to read yet, including tales from the Four Horsemen Mech series, which I really like), but I was intrigued enough to want to see where the author would go with this story & having some credits to spare I bought Pack 2. At the end, I'm still glad I did. And I'll consider the next. Book 5 is out, but not yet on Audio. It's only 152 pages long (3 & 4 were 170 & 190, total 8 mins shy of 10 hrs), so I'll wait until Publisher's Pack 3 comes out with 5 & 6 before continuing the story,

SUMMARY -
All things being said & despite how meteoric her rise & feats may be, it's an enjoyable coming of age scifi with a strong female MC, something I can absolutely appreciate. It's just a little harder to swallow because it's not tongue in cheek, but a more seriously toned series. But, hey, we're talking aliens here, so anything's feasible. I suppose.

It's not a "girl's" series. The MC could've just as easily been a guy, so it should appeal to both Male & Female audiences.

It's definitely MUCH better than a lot of the badly written rehash of standard tropes flooding the market today.

I'm curious to find out where it goes next in Pack 3, which hopefully won't be too far away (this review is April 2021).