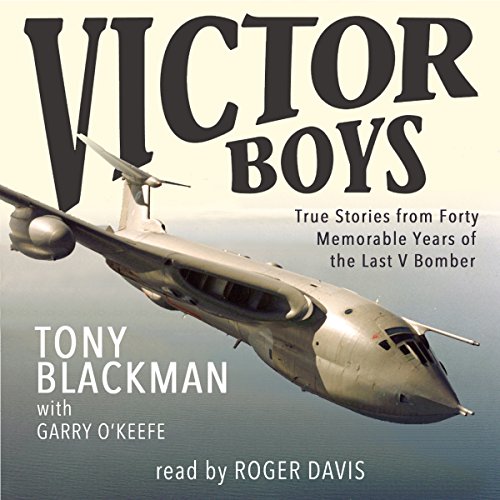 The Handley Page Victor was the third of the three V Bombers and the longest lasting, serving in the RAF until 1993, and still doing invaluable service in the first Iraq war. Moreover, in 1982, it was the only Victor tanker fleet based on Ascension Island that made possible the Vulcan Black Buck bombing of Port Stanley airfield and the long-range reconnaissance of Argentina by Nimrods. Victor Boys tells the story of all the great things that were achieved, recounted firsthand by the operators themselves, aircrew, and ground crew.

Starting with accounts by test pilot Johnny Allam, who undertook the major development of the aircraft, through its work as a nuclear bomber during the Cold War, testing Blue Steel in Australia, to its superb work during the Falklands war and later as a first class air-to-air refueling tanker and vital support tool for fighters and other aircraft.

Published to coincide with the Victor's 60th anniversary, the stories are collated and set in context by Tony Blackman, ex-chief test pilot of Avros who helped develop the Vulcan and initiated the development of the Victor K2 tanker. For him, initially, the Victor seemed a competitor but he now readily admits what a wonderful aircraft the Victor became.

Would you consider the audio edition of Victor Boys to be better than the print version?

Not seen the print edition but at least there is emphasis in the audio narration which is probably accurate.

It brought the aircraft to life, I want to build a model of it now...

Which character – as performed by Roger Davis – was your favourite?

Roger Davis' narration is not in character as such, (daft question really), but his narration is an easy listen.

You feel great empathy for the crews, especially the one's who didn't make it home.

It really made me appreciate the value of the tanker fleet and how valuable they were, especially in the Falklands and first Gulf War.

A history of the mighty HP Victor.

An interesting tale all round. Test flying of the Victor,explaining some of its quirks,the leap in performance to the Conway engined K2, it was an awesome aeroplane, as well as being stunningly beautiful.The mental gymnastics required in the tanker force when plans went awry taking the Vulcan to bomb Port Stanley. A fascinating tale,highly recommended.
I've discovered any book with Tony Blackman as author will be worth a read if you are an aviation buff.

I thoroughly enjoyed it....

The author walks us through the life and significant moments throughout the HP80' existence.

Narration was on the whole good also.

A book of pride to all involved with aircraft boys