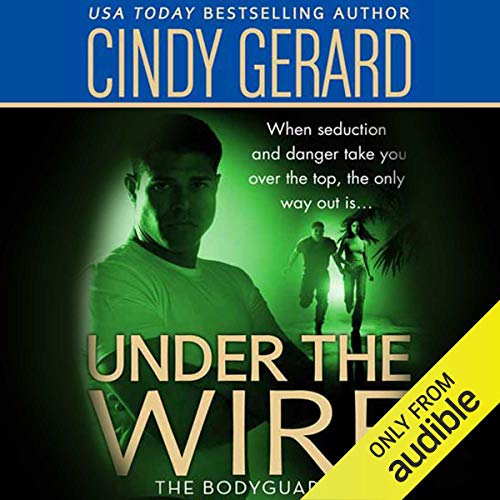 Manny Ortega is a man without a country, and he has one woman to thank for it. She was his first and only true love, and when she left she took more than his heart - she took his life as he knew it. Hardened and honed as sharp as a knife by years as a Special Forces soldier and police detective, Manny is ready for a fresh start at his friend Ethan Garrett's security firm. But the past isn't ready to let him go.

Lily Campora never imagined what would happen to Manny after she walked away from him that night in the sultry Nicaraguan heat - or how he'd hated her for it every day since. Seventeen years later Lily knows everything, and she must put her fear of Manny's rage aside to beg for his help. His forgiveness may be too much to hope for.

Thrust into action on a mission that will transport them to a country rife with political turmoil and civil unrest, Manny and Lily must find a way to work together. And now, amid the dangerous beauty of a landscape reminiscent of Manny's homeland, passion will ignite once more.

What listeners say about Under the Wire

The narrator of this one is painful to listen to. Literally skipping this book in the series after listening to just a few chapters because I couldn’t stand the narration.

This narrator needs a Valium.

The story was what I expected from Cindy Gerard, pretty good story line with a few things that are eye rolling over the top. But this narrator.....can we say over-acting? I get that they want some life breathed into the story, but this guy is cringe worthy sometimes. Really glad he only did this one book or I wouldn't have made it through the series.

I really like the Bodyguard series. This was a good book but probably one of my least favorites! It has a great story line but what bothered me the most was the narrator’s voice for Manny! I laughed so much during the love scenes because I couldn’t get the idea of Puss n boots, saying those lines, out of my head. The voice just didn’t fit Manny’s character. This may be better if you read it and don’t listen to it. That voice over really ruined it for me. He just wasn’t manly (Manny) enough for the strong male lead!

I have very much enjoyed this series until this story. I could not tolerate the two main characters especially the woman Lilly. Manny wasn’t much better. I ended up skipping huge portions just so I didn’t have to listen to their internal musings. They were just too pathetic. I think I’ll put Linda Howard books on pause for a good long time.

Honorary Garrett, Manny Ortega lost everything as a young man because he trusted the wrong woman or so he thought. Seventeen years after being betrayed by love Manny on the cusp of a new life working for best friend Ethan at EDEN comes face to face with the woman he once loved and now hates with a passion.

Lily Campora already reeling from the knowledge that Manny wasn't killed in Nicaragua can't believe he thinks she betrayed him, doesn't know how to convince him she didn't. Now she must put her fear of Manny's rage aside to beg for his help.

What follows is an action packed race against time where Manny and his friends find themselves pawns in Sri Lanka's civil unrest. As Manny and Lily are forced to work together, passion rekindles, but questions remain.

If they survive can Manny let go of the past? Was he betrayed by love? If not can Lily convince him of her innocence? What do the bad guys really want? All these questions and more are answered in this action packed romance that I thoroughly enjoyed listening to over one very long night. So sad that the series is nearly over....

The storyline was decent but the narrator’s performance was so over the top I was too distracted to really get into it. The intimate scenes were repulsive due to extremely overdoing the accent and constant exhaling into the mic. Lily’s voice was fine but most of them were ridiculous.
If the portrayal of Manny was supposed to be a sensual Latin lover, I’ll pass. 😕

First of all, I felt the writing for this story was the weakest of all in the series—Not necessarily the plot, but the writing itself. I can’t quite put my finger on it but it didn’t seem like the same quality as the other books. Secondly, I really wanted to finish this series so tried to look past all of the comments about the narrator, but he was absolutely awful. Maybe he was chosen because there was Spanish in this one and they felt that he was better suited for the Spanish, but his accent with Manny while he spoke English (even though Midway through the book lily notes that he had lost most of his accent) as well as the ways that he portrayed Dallas, Darcy, and at the end of the book Nolan, were all terrible. I don’t mean to sound like a jerk, But I Wouldn’t have finished this book if it wasn’t my last in the series and I wanted to see how manny’s story wrapped. It’s a shame because this was a great series otherwise and I have now moved on to her next series that starts with Gabe and these are all great books except for this one.

I am 3 chapters in and I just cannot continue. This s narrator is horrible.

Narrator leaves a lot to be desired

I love this series and he narrator for the first four is fantastic. This narrator’s choices make the characters sound like they have cartoon voices. I almost gave up on it. Manny and Dallas are the worst.

I love the character of Manny and the story was good. However, the narrator creeped me out. It was hard to listen to. He ruined Dallas’s voice and the rest of the Garrett brothers. I only finished it because I struggle with quitting a book. When Manny and Lilly were intimate he sounded like a pervert. It would be better to read this one than listen.