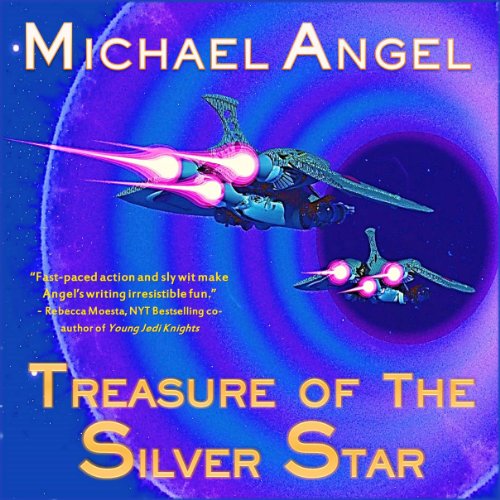 Treasure of the Silver Star

In the far future, a beautiful treasure hunter and a disgraced spaceship captain plunge into the fight of their lives when they're ambushed in deep space!

The smashed derelict ship they're exploring holds a deadly secret from the last Interstellar War. And there are some who will kill in order to keep the past buried.

What listeners say about Treasure of the Silver Star

Yes, because I was able to get stuff done with free hands as I listened.

I liked that a main character had to face a tough decision, but I never worried about main characters perishing. The story wasn't that serious, so the ending didn't have much tension.

What aspect of Lee Strayer’s performance would you have changed?

The final editing. Some sentences were repeated.

Maybe. Is there free popcorn being offered?

Set in a far flung galaxy, we have a disgraced starship captain (Drake) and an independent archaeologist (Tally) who must join forces to save the galaxy and perhaps earn a little money. Drake’s command crew made me think of Star Trek (Sebastien, Kincaide, Ferra, etc.) and the space battle scenes were reminiscent of Star Wars battles. Definitely a mix mash of pulp fiction and space opera.Drake struggles through the book to regain his former polish and glory after wrongly being placed in the Losers box with a bunch of Loser rejects on a Loser ship.

Then we have the treasure hunter/archaeology aspect thrown in. Tally made me think of a female Indiana Jones; she was very focused on her goal and not afraid of the physical effort it would take to get it. She had some of the most interesting scenes because they had to do with history, and therefore, had the most detail.

The plot was pretty straight forward and the characters, once established, didn’t change much. The bad guys were stereotypical and our heroes are 100% good guys. Normally, I enjoy a bit more variation in all of that, but for a fast paced, short space opera, it was decent. If you have some task where you need your hands and a bit of concentration, then this would be good braincandy for the background.

We had more men than women and I would have enjoyed seeing that a bit more balanced. But the few females we had in the storyline added to the plot and weren’t just scenery. The one sex scene came off as a bit awkward and didn’t engage my libido. I like my sex scenes and if one (or more) are going to be thrown in, they should count.

Narration: Lee Strayer did a good job of keeping the characters distinct. There were a few passages where the sentences were repeated, so not the cleanest on final editing. Still, the actual narration was well done with clear feminine and masculine voices, different accents, and proper emotions.