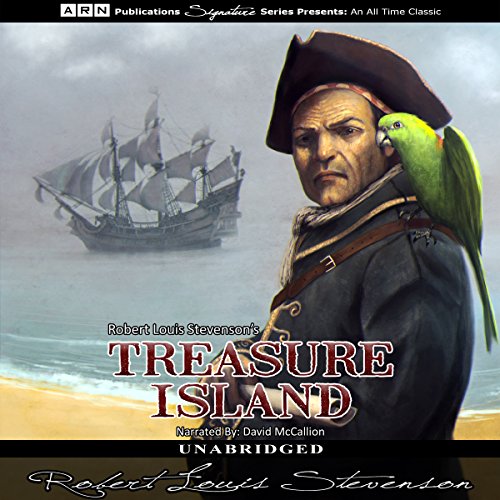 Treasure Island by Robert Louis Stevenson tells the tale of the crew of the Hispaniola as they travel across the sea in search of the long-lost treasure of the infamous Captain Flint. When Jim Hawkins finds a treasure map in the sea chest of an old sailor who had been staying at his parents' inn, he sets off on an adventure in search of the captain's hidden fortune. The district squire, Mr. Trelawney, decides to buy a ship and go in search of the treasure, bringing along Jim as cabin boy and the local physician, Dr. Livesey, as ship's doctor.

They assemble a crew full of able seamen and a particularly interesting one-legged character as ship's cook who goes by the name of Long John Silver, and they head off in search of the mysterious island. But before they even reach their destination, Jim, Trelawney, and the doctor realize their lives are in danger, and upon reaching the island they must take desperate steps to stay alive as the true intentions of some of the ship's crew becomes clear.

The book was first published in May 1883, after it had been serialized in Young Folks Magazine between 1881 and 1882. Its depiction of life on the high seas, including treasure maps, pirates with parrots on their shoulders, and much more, has continued to entertain and influence to this day.

What listeners say about Treasure Island

It's a mother of all teens adventure stories. Once and forever. Very good plot! Enjoy every word of this sort!

Love this story, but I felt like David McCallion
was trying to talk like
he was in poetry
And not in prose
So he would sway
His voice every few beats.