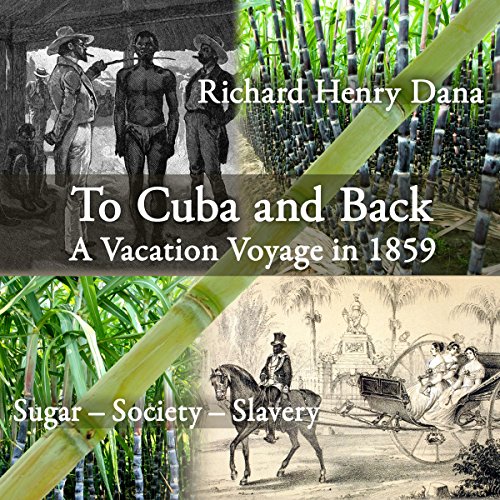 To Cuba and Back

The master is a policeman as well as a judge. His revolver and rife are always loaded. He has his dogs, his trackers, and seizers. No man rides unarmed.

Join abolitionist Richard Henry Dana as he explores Spanish Cuba in 1859, where kidnapped Black Africans were slaves on vast sugar plantations along with impoverished Chinese coolies suffering under unbreakable eight-year contracts. Dana visited Cuba on a fact-finding mission he calls a vacation voyage. He describes Cuban slavery; explores Cuban society, institutions, and educational systems; and exposes a corrupt prison system, where the more a prisoner pays, the less he is punished.

In 1859, slavery was still legal in the United States and flourished throughout the Southern States. Because of Cuba's close proximity to the United States, some slaveholders felt it could be a natural extension of the American southern slave states.

A few years earlier, the Ostend Manifesto was proposed, under which American slave states attempted to have the United States purchase Cuba from Spain for $30 million dollars. Their idea was to expand slavery to beyond the boundary of the US. The plan was not successful.

So when Dana took his vacation, he was well aware that Cuba was a place where United States interests attempted to sustain slavery and that he was entering territory with slave practices that were abhorrent to him.

In November, a year later, Abraham Lincoln was elected president of the United States, and one year after that, the American civil war began. The war resulted in the end of slavery in the United States...but not in Cuba, which was still owned by Spain.

What listeners say about To Cuba and Back