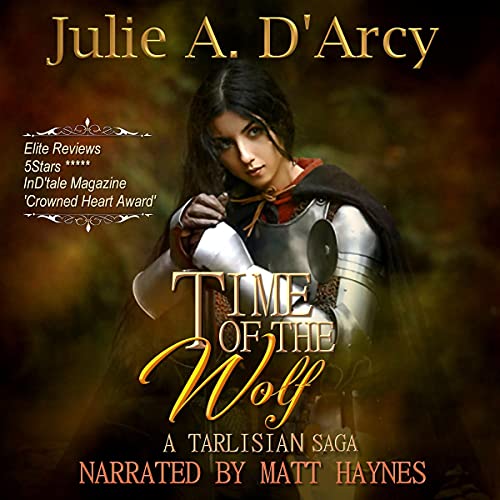 Time of the Wolf

By: Julie A. D'Arcy
Narrated by: Matt Haynes
Free with 30-day trial

Sent by the mage Brekan, Keilah, outlawed Princess of Carrum Bahl travels back in time to seek out Radin Hawk, the reincarnation of an ancient warrior king. She is not prepared for the strong feelings she has for him or the feeling of familiarity.

Radin is always game for a good fight, but when the battle risks the woman who reminds him of his lost love, he is not sure the price is worth it. But how can he leave her undefended and return to his own time?

They follow Brekan on his quest to defeat Anaya the Sorceress Queen and right an ancient wrong. But wonder what he is hiding. Can they trust their feelings and each other, or are they just pawns in a larger game?

What begins as a quest to stop a witch queen from raising her lover to destroy a nation becomes a battle against the dark side of human nature...and a race against the crumbling gates of time.

What listeners say about Time of the Wolf

Myth, magick, action, romance and lust all come together for a unique story. Well rounded characters that pull you in and have you battling beside them.