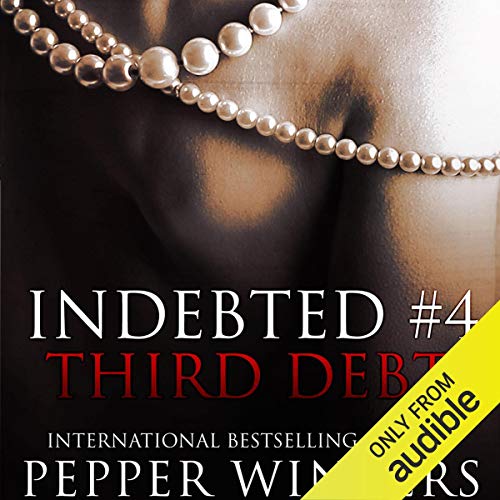 "She healed me. She broke me. I set her free. But we are in this together. We will end this together. The rules of this ancient game can't be broken."

Nila Weaver no longer recognizes herself. She's left her lover, her courage, and her promise. Two debts down. Too many to go.

Jethro Hawk no longer recognizes himself. He's embraced what he always ran from, and now faces punishment far greater than he feared.

It's almost time. It's demanding to be paid.

The third debt will be the ultimate test...

The story and narrators are excellent. Classic Pepper Winters. Very rarely have there been such perfectly casted narrators. I hate to give a poor review for something not related to the author or story.

The technical frustration with chapter 27 should be corrected. Overlapping dialogue from another section of the book.

chapter 27 7;00 is broken and over lapped by a louder part of the story , very annoying, makes me not want to hear the rest of the book.

And the debts roll on...

What was one of the most memorable moments of Third Debt?

I love the part where Kestral gives Nila the horse and they went riding together. That whole scene was cute and funny and reminded me of her relationship with her brother V. I loved that he was giving her a part of her family she was missing and also some family. Kestrel had another part of the book that also was one of my favorites but I don't want to write about it as it's a big part of this book and I don't want any spoilers. :)

Have you listened to any of Kylie C. Stewart and Will M. Watt ’s other performances before? How does this one compare?

I have listened to Will and Kyle in all the other Debt Inheritance books and this one was just as great as the other books. I can't wait for other books with these two. They are now favorite performers of mine and I wouldn't hesitate to buy others of theirs.

Please fix the audio as chapter 27 is broken...

The third debt is full of surprises, no boring moments, you feel it and what a cliffhanger!!!
Enjoyed both narrators, great job!

I just want to say in chapter 27 I think the audio overlaps, considering asking for an update, because I don't want to spend my credits on audio with some kind of glitches

I recommend this series, waiting for the next audio book

I love this story even if a bit implausible! The characters are compelling and you can't help but root for Jethro and Nyla all while wanting to shake some sense into them. Now that Jethro's illness is revealed in the book, he may figure out why is father is always one step ahead of him (no spoilers here). The narrators were awesome, they have made this series very enjoyable even if the content gets really dark. So far this has been my favorite book in the series.

I'm really hoping the 5th book is the final and everything will be revealed and it gets released SOON!

I HATE CUT, DANIEL & BONNIE!! They are such sick and demented vermin! The fact that I feel such a strong emotion for these characters should tell you just how amazing this series is!!

So many twists and turns. Love and hate and betrayal. Right when I thought I had this series pegged down, oh my god. Twist. My heart is breaking through the love, through Jethro's "condition". Through it all and the cliffhanger of all soul destroying cliffhangers.

And now on to the 5th book.

The roller coaster ride has drained me. Just when I thought things were going to be alright, the story shifted and left me broken and sobbing. I don't know if the next book will grant a reprieve, but....the story must continue.

I loved this book. The debts get more intense and the tension builds. Can Nila survive anymore? Will Jethro ever face his feelings for Nila? Will we ever find out the truth? Just a few of the many questions that pop up with another ending that leaves you hanging in anticipation. The narration is perfect with their portrayal of the characters feelings, pulling you deeper into the story, causing you to get more attached to these characters. An intense, heart-racing, heart-stopping roller coaster of a ride where emotions are concerned.

This series has been by far my favorite, and I've read/listened to many books. I've never experienced duet narration before and it just added to this amazing series.

However, this series doesn't do that, and I'm eternally grateful for it. This has been my first experience with back and forth narration. Will M. Watt only voices the male characters and Kylie C. Stewart only voices the female ones. It makes for a great reading experience and it's much more clean cut and realistic. Pepper Winters did an excellent job on this series and the narrators brought it to life in my mind. You should definitely check this series out. <3

My heart went on a roller coaster. Love, sadness, fear and lust. It broke and healed, just to be broken again. I have never read anything like this before.

Will this not just end already?!?

I'm bored now. The characters have somehow become more two-dimensional and even the ones I previously liked are now annoying me. How many more books are in this series? I don't intend to find out and am tapping out now.