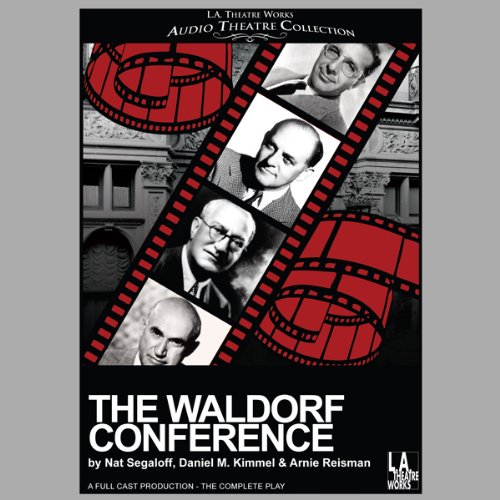 Playwrights Nat Segaloff , Daniel M. Kimmel, and Arnie Reisman dramatize the creation of the Hollywood Blacklist in The Waldorf Conference. On November 24, 1947, the power players of the American film industry met at the Waldorf-Astoria Hotel. Their goal? To discuss what actions to take in response to the House Un-American Activities Committee. The result? A list of people banned from working in Hollywood on the grounds they held sympathetic ties to Communism. Actors Edward Asner, Shelley Berman, Charles Durning, David Ellenstein, John Kapelos, George Murdock, and Richard Masur deliver commanding performances, weaving a captivating portrait of this real-life story.

On November 24, 1947, the most powerful men in American film met in New York’s plush Waldorf-Astoria Hotel to decide how to address the Communist witch-hunt being carried out by the House Un-American Activities Committee. Twenty-four hours later, they emerged having created the Hollywood Blacklist. The Waldorf Conference dramatically speculates on what went on in that room.

What listeners say about The Waldorf Conference

Even Hollywood was never this Jewy

I liked this piece, but I didn't love it. It's an imagining of what actually went on in 1947 when Hollywood executives met at the Waldorf Astoria to discuss their response to the refusal of ten Hollywood writers and directors to testify before HUAC. It's a fun piece mostly because of its portrayal of famous and colorful characters, like Metro, Golwyn and Mayer.

While the Waldorf Statement is mainly remembered today as Hollywood failing to stand up for the principle of free speech, this play makes a lot of two issues we rarely think of. The first was an ongoing anti-trust campaign against Hollywood, which eventually led to the end of "the studio system," which I wikipediaed as a result of this play and I invite you to do the same. Chasing imaginary communists, which ironically meant these powerful men colluding at the Waldorf, was seen as a way to get Congress to look the other way on their exclusionary business practices.

The second issue was antisemitism. This was only a couple of years after the end of World War II, and there was a perception of Jews and communists (and Jewish communists) having manipulated the country into fighting their enemy, the Nazis. Also, these powerful men had vivid and fresh images of a seemingly advanced country turning against Jews in horrific fashion. It's a good point that I hadn't fully appreciated in the broader story of the Red Scares, but I think it's a little overdone in this piece, hence my healine.

I'll mention that there are a lot of characters, all male, with deep, slightly accented voices tending towards hysterics. Usually LA Theatreworks does a very good job of picking voice actors you won't confuse, but they have their work cut out for them with this piece, and they only partly succeed.