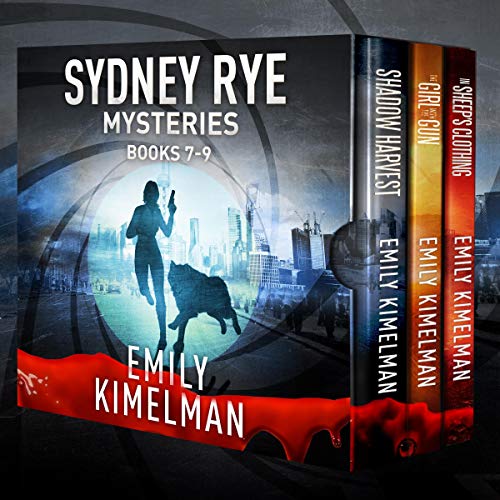 Justice with a vengeance...

Continue the adventure with Sydney Rye and Blue in this box set, as they travel from the streets of Shanghai to the war-torn Middle East, determined to fight injustice no matter the cost. This audiobook includes these three books: Shadow Harvest, The Girl with the Gun, and In Sheep's Clothing.

When Sydney Rye's good friend Merl goes missing in Shanghai, she and her faithful dog Blue rush to the People's Republic to track him down.

With time running out, and powerful forces closing in on her, Sydney is willing to risk everything to save her friend, but will everything be enough?

The Girl with the Gun (A Sydney Rye Mystery, book eight)

Sydney Rye is tasked with the perfect assignment: recruit female fighters to take on jihadists. Being killed by a woman is the only thing extremists fear because they believe it bars their entrance to heaven.

But when the director who enlisted Sydney Rye is killed, and the deal she made is scrapped, Sydney and Blue are left in a war zone, hunted by both the US government and jihadists.

Sydney Rye is missing. All that’s left of her is a depression in the dirt and a pool of blood.

Robert Maxim is ruthless, powerful, and determined to find her.

April Madden is a preacher’s wife and Sydney’s mother. She’s willing to risk everything - her sobriety, marriage, and even her faith - to hunt for her daughter.

But they can’t find Sydney Rye if she doesn’t want to be found.

Was fast paced, multi charecte rs and locations. Am waiting for next book in the series.

I have enjoyed this series so much! And for as many accents as there is in the stories, Sonya Field is amazing! High action, awesome characters, twists and turns, and so much more.

Completely Addicted to this series

Amazing story and the best narrator I've ever heard. I'm an avid audio book listener as well as reader. I will finish this series and look for others this narrator has done.