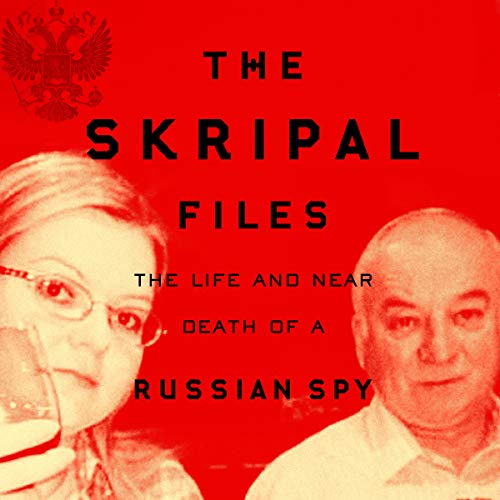 The Skripal Files is the explosive story of the poisoning of Sergei Skripal and the new spy war between the West and Russia from number one best seller Mark Urban, Diplomatic and Defence Editor for BBC Newsnight.

Sergei Skripal and his daughter Yulia were enjoying a rare and peaceful Sunday spent together, completely unaware they had been poisoned with the deadly nerve agent Novichok. Hours later both were found slumped on a park bench close to death.

Following their attempted murders on British soil, Russia was publically accused by the West of carrying out the attack, marking a new low for international relations between the two since the end of the Cold War.

The Skripal Files is the definitive account of how Skripal’s story fits into the wider context of the new spy war between Russia and the West. The Skripal Files explores the time Skripal spent as a spy in the Russian Military Intelligence, how he was turned to work as an agent by MI6, his imprisonment in Russia and his eventual release as part of a spy swap that would bring him to Salisbury, where on that fateful day he and his daughter found themselves fighting for their lives.

What listeners say about The Skripal Files

Intrigue! Not just in movies!

Great insight into the world of spying and the mindset of the current Russian leadership.

Entertaining and well written, but released too soon

Excellent and enjoyable. But released before the Bellingcat reports and TV interviews of Mishmin (alias Petrov) and Chepiga (alias Boshirov) it is post facto incomplete. A pity because otherwise very good.

No hesitation in recommending Mark Urban's book, it's just so engrossing and a real eye opener. He paints such vivid picture of how and why we ended up in Salisbury with an attempted murder on the Skripal's lives.

Mark Urban has provided exemplary commentary on an incredible chain of events. The research adds background and substance to the activities of the secret intelligence services across the globe and the subsequent nerve agent attack in Salisbury. Well worth a read or listen.

An amazing insight into the workings of the GRU and the Russian mindset when it comes to traitors and how they should be dealt with. Mark Urban explains clearly how the events in Salisbury can be traced back to the 90s if not even earlier.