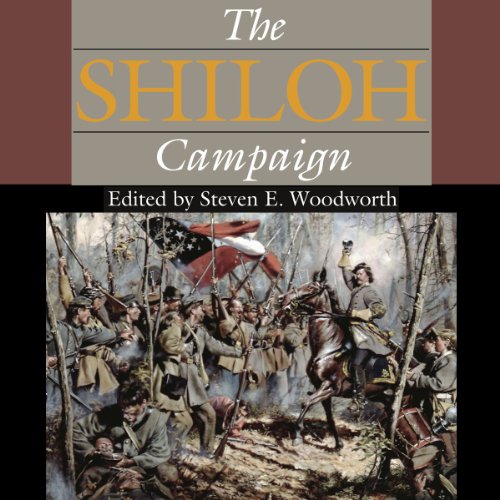 Some 100,000 soldiers fought in the April 1862 battle of Shiloh, and nearly 20,000 men were killed or wounded; more Americans died on that Tennessee battlefield than had died in all the nation's previous wars combined. In the first book in his new series, Steven E. Woodworth has brought together a group of superb historians to reassess this significant battle and provide in-depth analyses of key aspects of the campaign and its aftermath.

The eight talented contributors dissect the campaign's fundamental events, many of which have not received adequate attention before now. John R. Lundberg examines the role of Albert Sidney Johnston, the prized Confederate commander who recovered impressively after a less-than-stellar performance at forts Henry and Donelson only to die at Shiloh; Alexander Mendoza analyzes the crucial, and perhaps decisive, struggle to defend the Union's left; Timothy B. Smith investigates the persistent legend that the Hornet's Nest was the spot of the hottest fighting at Shiloh; Steven E. Woodworth follows Lew Wallace's controversial march to the battlefield and shows why Ulysses S. Grant never forgave him; Gary D. Joiner provides the deepest analysis available of action by the Union gunboats; Grady McWhiney describes P. G. T. Beauregard's decision to stop the first day's attack and takes issue with his claim of victory; and Charles D. Grear shows the battle's impact on Confederate soldiers, many of whom did not consider the battle a defeat for their side. In the final chapter, Brooks D. Simpson analyzes how command relationships - specifically the interactions among Grant, Henry Halleck, William T. Sherman, and Abraham Lincoln - affected the campaign and debunks commonly held beliefs about Grant's reactions to Shiloh's aftermath.

The Shiloh Campaign will enhance readers' understanding of a pivotal battle that helped unlock the western theater to Union conquest. It is sure to inspire further study of and debate about one of the American Civil War's momentous campaigns.

The book is published by Southern Illinois University Press.

"This book comprises eight superb essays by seasoned historians who concern themselves with the essential questions and controversies about bloody Shiloh, the single most pivotal and defining battle in the western theater. It is not the last word on Shiloh, but it will be considered the foremost for many years to come." (T. Michael Parrish, author of Richard Taylor: Soldier Prince of Dixie)
"This is an excellent study of the critical Shiloh campaign. All students of the Civil War, whether professional or amateur, will find the work interesting and informative." (Charles P. Roland, author of An American Iliad: The Story of the Civil War)
"This stimulating collection of essays explains better than many full narratives of the battle why the Union won at Shiloh. Equally, it clarifies the battle's crucial role in the context of the wider conflict. Woodworth and his contributors present a sterling example of how the western theater shaped and dictated the course of the Civil War. (Daniel E. Sutherland, editor of Guerrillas, Unionists, and Violence on the Confederate Home Front)

What listeners say about The Shiloh Campaign

The narrator sounded like an automated system from the 90s. Mispronounced words and sounded like he was ending sentences prematurely. Very distracting. Great book. Great research. Horrible narrator.

What did you love best about The Shiloh Campaign?

I really liked the viewpoints that contradict most of the mainstream versions of the battle.

The worst thing was the cadence of the narrator. It was often disjointed with awkward pauses in mid sentence.

My kingdom for a dictionary

Why do producers allow narrators who can't pronounce historic names to narrate? I cringed at bivouac, but a almost threw my phone away at a terrible pronunciation of Appomattox. There were too many to list. These come to mind first.
Story was good and interesting side of the Shiloh Campaign was presented, but please make sure your narrator can speak English.