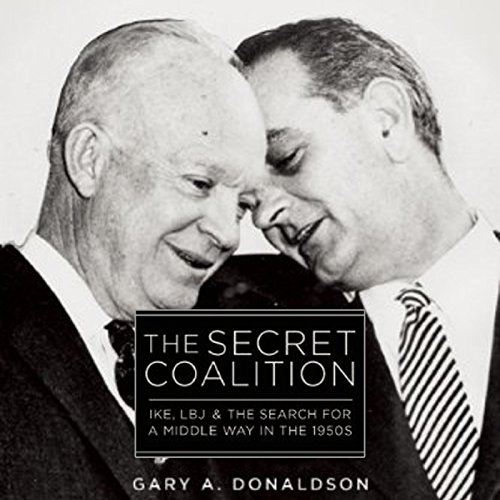 By: Gary A. Donaldson
Narrated by: Gregory St. John

The politics of the 1950s revolved around two primary leaders, one Republican and one Democratboth moderate, and both willing to compromise to move the nation forward.

The Republican leader was President Dwight Eisenhower. His two administrations changed American politics. Ike’s desire to be president of all the people, to run his administration down the middle of the road, to be a "modern" Republican, set the stage for what the Republican Party would be for decades to come. His politics of moderation triggered a backlash from the party’s right wing that eventually grew into a conservative surge that reached fruition in the following decades.

Standing astride the opposition was the Democratic leader in the Senate, Lyndon Johnson. At age 44, Johnson was the youngest leader in Senate history. His willingness to join forces with Eisenhower in the president’s battles against isolationism and reaction in his own party, along with the willingness of both men to compromise rather than engage in a politics of search and destroy, turned the 1950s into an era of political moderation. In The Secret Coalition, Gary A. Donaldson insightfully explores a period in U.S. history that many Americans regard as an "Era of Good Feeling" when the two parties got along, and the nation achieved some sort of equilibrium and cooperation.

What listeners say about The Secret Coalition

Donaldson not only discusses the working relationship between Eisenhower and Johnson but also provides a brief history of politics in the 1950s. The author provides a brief biography of FDR, Truman, Eisenhower, Johnson, General MacArthur, Senator Bird and Strom Thurmond to furnish the read with a basic understanding of the people involved and the workings of the government at the time. Donaldson’s claims that Eisenhower’s politics and moderate, middle of the road administration triggered the backlash from the right-wing Republicans that is still being felt today.

Donaldson provided some information I was totally unaware of. He claims that as the Cold War progressed the far-right wing members of the Republican Party became more upset with Eisenhower. They were isolationist and adamant against communism, and were demanding Eisenhower engaging in military action including a pre-emptive nuclear strike against the USSR. According to Donaldson they stated Eisenhower’s policy of peaceful co-existence was in fact appeasement.

Donaldson also reveals the problems that Johnson had with the left-wing Democrats with his compromises with Eisenhower to get bills passed. The Civil Rights movement was starting and the Democrats thought Johnson was giving in to the right-wing Republicans on civil rights.

Some authors claim that the period of the Eisenhower administration was a “time of good feelings” but Donaldson set out to prove it was not. I lived through this period but the book provided me with information I was not aware of and insights into the politics of the time as compared with today. If you are interested in history or politics, you will find this short book informative.

Gregory St. John did an excellent job narrating the book. St. John is an actor and audiobook narrator.

Very detailed in content, which is a good thing. It also took you behind the scenes in terms of the relationship between Eisenhower and Johnson in developing the "middle way." How we long for those days! Bipartisan support for one another. It also details the rise of the conservative and liberal movement at the end of the 1950's.

What made the experience of listening to The Secret Coalition the most enjoyable?

Learning about how LBJ was able to control the different Northern liberal and Southern conservative factions within the Democrat Party; learning about Eisenhower maintained a coalition of moderate and conservative Republicans within his party; and learning how their abilities to forge compromise unraveled toward the end of the 1950's

There did not seem to be a lot of original source material presented. The author did not present new conclusions about the period. There may have been a consensus of a moderate approach in foreign and domestic policies within both parties during the period. LBJ and Eisenhower masterfully held their respective coalitions together during much of Eisenhower's presidency. But there never was a secret coalition between the two men, which makes the title and premise of the book misleading. Both men were motivated by their own political self-interest and not out of goodwill. Still it's an interesting book about this period of American political history.

Coverage of the events in Little Rock in 1957

There were some sloppy errors in the narrative- Senator Mike Mansfield was from Montana not Ohio and Senator Robert Taft died in 1953 not 1958. The narrator's pronunciation was Khruschev was irritating.

It’s really a good and worthwhile listen, shining a strong light on the Johnson Eisenhower relationship, and on Johnson’s misunderstanding of hell mistakes have changed in creating a portfolio on which to run for president. Some of the editing proves loose and hasty, and there are errors which do jar anybody who knows better. For example, Robert Taft is at one point said to have died in 1958, five years after he actually died. Richard Nixon is said to have been elected to the Senate in 1948 instead of the actual 1950. Mistakes like this cast doubt on the rest of the scholarship.

The Secret Coalition fills in the blank

Incredible fill in the blanks story. Full of oh wow— that’s why!!??
My coming of age years now make sense, now that I have a bit of the backstory to the history I lived through.

Narrator is so bad I couldn't listen.

Guess I'll have to read it. Disappointing. This is an important story and deserves better narrative treatment