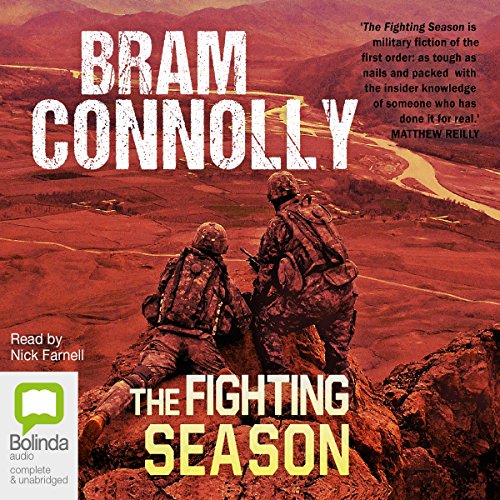 Introducing Matt Rix...Australian commando. An explosive thriller from the heart of Afghanistan.

Outside the wire, Uruzghan Province, Afghanistan, 2010.... In the badlands of central Afghanistan, an Australian Special Forces platoon is fatally hit by a roadside bomb. A shadowy Taliban commander, codenamed 'Rapier', is identified as responsible for the deadly attack. Matt Rix, the ultra-tough commando who led the ambushed platoon, swears vengeance. Rix is one of Special Forces' most lethal operators. He'll neutralise Rapier - whatever it takes.

But in Afghanistan's brutal war, not all things are as they seem.

" The Fighting Season is military fiction of the first order: as tough as nails and packed with the insider knowledge of someone who has done it for real." (Matthew Reilly)

Awesome story. Narrator is exceptional. Looking forward to the next book. Cheers for sharing Bram.

Great story Very detailed and highlights the struggle Australian forces face in times of tension. Extremely well narrated. Loved the book and looking for the next one. 10 out 10

I found the book captivating, acition packed and all round an enjoyable read. Excited to see whats to come next from this author.

best military thriller out there!

i have had the Honour of serving with Maj. Connolly, and the story he tells in this thriller is one of the best youll ever read, the names of the Operators may have been changed, but hearing their tale i know exactly who each is he is referring to

Thoughly enjoyed this story. The accuracy and extensive knowledge of the Australian Military is what made me respect the author and allow the story to flow so well. Showing all sides of the conflict was an interesting dynamic. The main focus on officers was a bit tedious at times, a bit more focus on the JNCOs and Diggers would have been great. This story captivated me from start to finish and time well spend to listen to. Keep up the good work.

Absolutely awesome. The author's first hand knowledge and experiences along with his creativity make for an outstanding storyteller. Well worth the listen.

Hard to turn off

Excellent narration by Nick Farnell of Bram Connolly’s amazing first book made it hard to turn off. With a story that has well rounded out characters and excellent action phases when Matt Rix and Yankee Platoon went outside the wire that truly held you on the edge of your seat; that was broken up by moments of the close mateship between the commandos that brought some chuckles with the mischief and jokes that Connolly has used.

Overall...this is one audiobook worth getting

Thoroughly enjoyed this book. Had been waiting to hear this one for a while and I am glad it was released as an audible edition and was not disappointed .

Up to date on military hardware etc which has let some of the other authors in this genre down over recent years.

As sais the narrator is top notch, he gets the point across and is enthusiastic the whole way through, great story, would be a good film.

This is a good first book to what could become a good series. I enjoyed the listen there was some good action. This was the first time i have Hurd this narrator and i think he did a very good job and i could easily listen to him again.