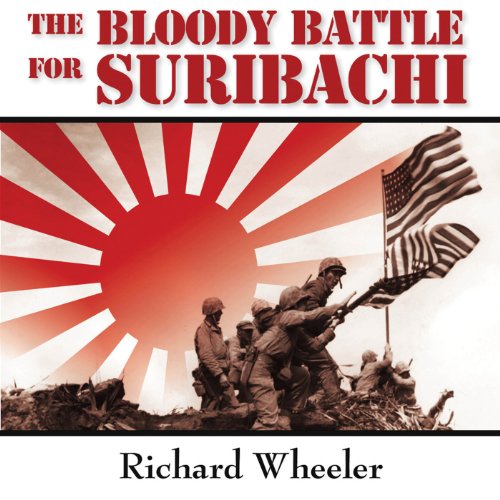 The Bloody Battle for Suribachi

In 1945, Richard Wheeler was a young Corporal in the 28th Regiment of the 5th Marine Division. His unit was sent from Camp Pendleton, in California, to a small island off the coast of Japan called Iwo Jima, where history would be made. Wheeler was severely injured in the battle and rushed to a hospital ship where he began making notes on all he had experienced. The notes became The Bloody Battle for Suribachi, the source material for James Bradley’s best seller and Clint Eastwood’s film The Flags of Our Fathers.

Danny Campbell performs Wheeler’s recollections in kindly tones of memory that help to soften this harrowing account of one of America’s bloodiest battles.

The classic first-hand WWII narrative that chronicles the Marines’ savage five-day struggle to wrest Mount Suribachi from its tenacious Japanese defenders during their 35-day battle for Iwo Jima in 1945. Revised with a new introduction by the author and recently discovered photos, this book served as invaluable source material both for James Bradley’s best-seller Flags of Our Fathers as well as Clint Eastwood’s acclaimed film of the same name.

What listeners say about The Bloody Battle for Suribachi

Well the title of my review says almost all I need to say. Well worth the listen and no complaints from me.

the famous flag battle we all know. Our Country has fault hard through history for the good of the Country. nice tribute.

Being a Marine myself, this book gave lots of pride in the Marine , I and many other Marines hope we have lived up to the stranded they set for us to follow. Semper Fi.

Very good story about a sequence of events not covered heavily in schools, a must read for any history buff.

Very With The Read

Very worth the read of real heroic story of freedom liberty living men and their sacrafici.

I would recommend this book to a friend or anyone interested in WWII A very intertaining book and true to history.