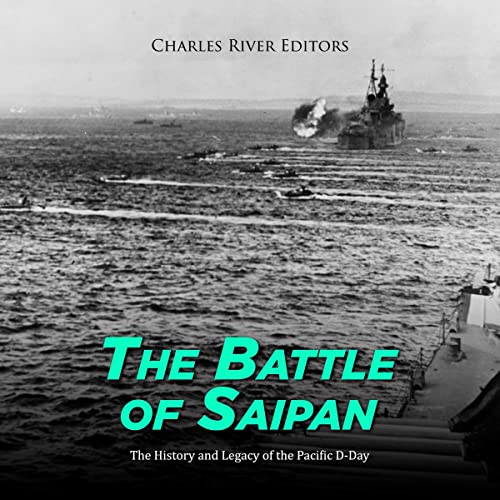 The Battle of Saipan

The powerful forces of the United States Navy (USN), Marine Corps, and Army advanced inexorably against Imperial Japan in 1944. Following massive interdiction of Japanese merchant shipping by American submarines and multiple naval victories, the Americans stood poised to liberate the Philippines, then move on to locations closer to the Japanese home islands.

In early 1944, arguments raged over the best approach to the “strategic triangle” created by Formosa, Luzon, and China. Finally, on March 12th, the Joint Chiefs of Staff - consisting of Admirals William D. Leahy and Ernest J. King, and Generals George C. Marshall and Henry H.”Hap” Arnold - issued a directive picking the next target: “[T]he most feasible approach to the Formosa-Luzon-China area is by way of Marianas-Carolines-Palau-Mindanao area, and that the control of the Marianas-Carolines-Palau area is essential to the projection of our forces into the former area, and their subsequent effective employment therefrom.” (Crowl, 1994, 19).

The Americans' plans focused on three islands near the southern end of a 15-island, north to south aligned island chain: Saipan, Tinian, and Guam. These islands, relatively large, offered space for the construction of large air bases within strategic bomber range of Japan itself, as well as closer targets. The Japanese also recognized the strategic importance of the Mariana Islands, and Saipan in particular, given its location just 1,272 miles from Tokyo itself. This would place the Japanese capital well within the 3,250 mile range of the Boeing B-29 Superfortress. With these facts in their possession and the Marianas as one of the Americans' most logical next choices, the Japanese worked to move both reinforcements and materials for new fortifications to the southern Marianas in early 1944.

Ironically, the operations that focused on Saipan came at nearly the same time Allied troops landed on the Normandy coast of France as part of Operation Overlord. This was the beginning of the final phase of the war in Europe, where German troops would find themselves trapped between Russians advancing from the east and the Allies moving west. The D-Day landings and the operations that followed in France, Belgium, Holland and Germany are amongst the most written-about and portrayed events in World War II.

Just over one week after the landings in Normandy, American troops took part in a massive amphibious invasion of Saipan, but intense public interest in operations in Europe meant that this invasion received less media coverage at the time, and it has been the subject of far less interest from historians and writers since. Part of the reason seems to be the different perception of the war in the Pacific. During the war in Europe, Allied troops were, for the most part, welcomed as liberators by the inhabitants of the countries they occupied. Combat was generally conducted according to the accepted rules of war, with troops who surrendered becoming prisoners of war.

In the Pacific Theater, combat was very different. The clash between American and Japanese troops was not just a battle between two modern nations; it was a conflict between two very different cultures and ideologies. Many Japanese soldiers fought according to the tenets of Bushido, the ancient warrior code first employed by the Samurai. This held that death was infinitely preferable to surrender, and that suicide was regarded as a legitimate and even praiseworthy act. The Japanese soldiers who did surrender were regarded with contempt, and enemy soldiers who fell into Japanese hands were treated with extreme cruelty.

What listeners say about The Battle of Saipan