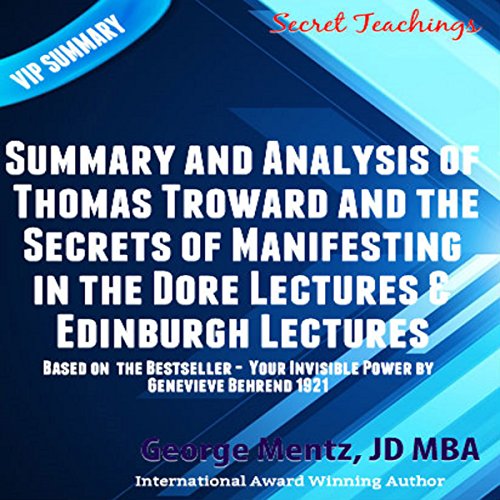 Judge Troward worked in India in the 1800s. His codification or world teachings influenced many of the greatest thinkers of the 20th-century American self-help movement. Troward believed that world was Universal Mind, and the seed of all things is thought in conjunction with the universal source. To materialize anything, one must think it and develop sufficient desire for the goal coupled with a clear mental image of the outcome. Further, Troward emphasized developing oneness with the source of all or Universal Mind. As he once stated, "Matter is not an illusion but a necessary channel through which life differentiates energy." Moreover, "The raw material for the formation of the solar systems is universally distributed throughout all space. This raw material can be cultivated by our mental and spiritual powers." Thus, our mental pictures are "The Attraction Energy" which allows original substance to take shape. Your mental pictures, constructive thoughts, and concentration mixed with your "I-am-ness" or "Harmonious Relationship with the Universal Mind" is the recipe which can allow success. Troward refers to the Invisible Supply in the same way as Universal Mind.

hard to get anything out of it. this kinda book ain't his bag. he can't get the point across good enuff

worth rereading and acting upon

I am so blessed to have found this book because it literally answered my once believed unanswerable questions. This is the how to information necessary to grasp any other self help reading and for the understanding of how and why it actually works. It couldn't have been explained any better than how it was done through Toward.

This summary was very good and you should get it

This summary explains how to use his methods to accomplish what you need to do to make your dreams come true.