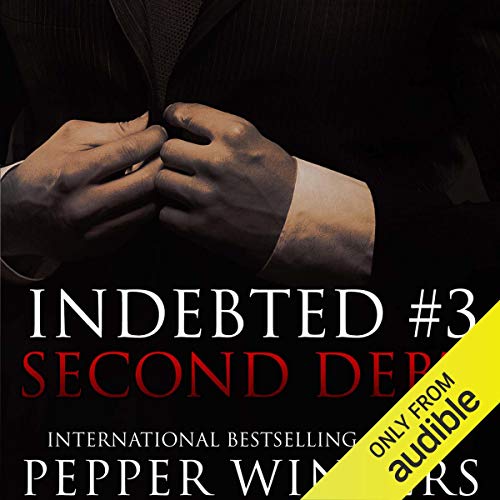 "I tried to play a game. I tried to wield deceit as perfectly as the Hawks. But when I thought I was winning, I wasn't. Jethro isn't what he seems - he's the master of duplicity. However, I refuse to let him annihilate me further."

Nila Weaver has grown from naïve seamstress to full-blown fighter. Every humdrum object is her arsenal, and sex...sex is her greatest weapon of all.

But she has no intention of letting the Hawks win.

Jethro Hawk has found more than a worthy adversary in Nila - he's found the woman who could destroy him. There's a fine line between hatred and love, and an even finer path between fear and respect.

The fate of his house rests on his shoulders, but no matter how much ice lives inside his heart, Nila flames too bright to be extinguished.

I'm sucked into the series...

If you could sum up Second Debt in three words, what would they be?

What about Kylie C. Stewart and Will M. Watt ’s performance did you like?

Will has such a way of bringing his character to life. You feel what he feels whether it is lighthearthed or dark you feel his emotions through his voice. Kylie is just a great in her performance, you can feel her fear and her hatred in her voice and you can also feel her emotions starting to bloom for Jethro.

What the hell ? I was not expecting that! I need them next one omg!

This book had my heart pounding and my tissue box emptying! Nila is the drug that treats Jethros condition and just when we think its a HEA...... WHAM!

Not only is the story incredible, but both readers bring the the characters to life in such a way that I feel I’m experiencing everything right along with them. They’re both great, but I can literally listen to Will M. Watt all day.

I am loving Jethro a little bit more with each book. I'm hurting so much for both Jethro and Nila. It's incredibly bitter sweet.

I expected the book to get darker and darker, which it has, but I didn't see the end coming either.

This series has been by far my favorite, and I've read/listened to many books. I've never experienced duet narration before and it just added to this amazing series.

However, this series doesn't do that, and I'm eternally grateful for it. This has been my first experience with back and forth narration. Will M. Watt only voices the male characters and Kylie C. Stewart only voices the female ones. It makes for a great reading experience and it's much more clean cut and realistic. Pepper Winters did an excellent job on this series and the narrators brought it to life in my mind. You should definitely check this series out. <3

I could not get enough of Nila and Jethro

Pepper Winters has created a unique world in her Indebted series. Book #3 talks about the second debt. The Hawks and the Weavers have been feuding for centuries. They have an arrangement that seems to stand the test of time, despite the fact that neither want to uphold it. Both Nila and Jethro are bound to each other and must carry out the debt inheritance, or all will be lost. As much as I want to dislike Jethro Hawk, Pepper winters has made me fall in love with him. She has an uncanny way of showing his vulnerability and making it so that you have to love him. I was glued to my seat to find out what would happen next in this series.

I am usually not a fan of dark romance, but Pepper Winters has drawn me in and hasn't let me go. I must find out what happens to Jethro and Nila.

This series MUST be read in order.

P.S. - Will Watt and Kylie C. Steward do a phenomenal job of narrating this story. Their performance completely enhances Pepper Winter's talent as an author. They sucked me in, making me feel like it was real and didn't let me go.

pepper is a phenominal writers and the readers bring this tale to life. I've never been so enthralled by the narrators before this series. I highly recommend this series

loving this series so far. absolutely engrossed in it. The narrator's are excellent. dreading not having audible available for the final half of this series though. love to disappear into their world and minds and hearts through their delicious voices. with the buds in the book can completely block or the distractions of reality as I delve into the tangled story of the weaver and hawk.

I am so in love with this series. In the beginning I was so enraged with how things were starting off, but as the books continues my love for the characters grow. I can not wait to see what will happen next.

Definitely would recommend. This is an incredible series that is almost unbelievable but actually you can well imagine that this does happen behind the scenes in stately homes.

What was one of the most memorable moments of Second Debt?

Cannot tell in detail but suffice it to say that I had nail marks in my palms when the second debt was extracted! It was incredible. I was actually gasping and calling out for him not to...silly but it's powerful stuff!

What does Kylie C. Stewart and Will M. Watt bring to the story that you wouldn’t experience if you had only read the book?

They have both helped bring the characters to life as Jethro does sway between two diff personalities, one to please Nila and the other to appease his family. Will gets the tone of Jethro's voice just right with a suitable amount of disgust for the peasant Nila who should be considered beneath him. Great work.

Would give the game away if I said but you'll know when you listen!!!!

Pepper Winters writes some really tough stuff. Romance that is difficult to take but none the less real. She is a master at what she does. Listen from the start and I promise you will not be disappointed with any of her work!! Cracking!!! :)