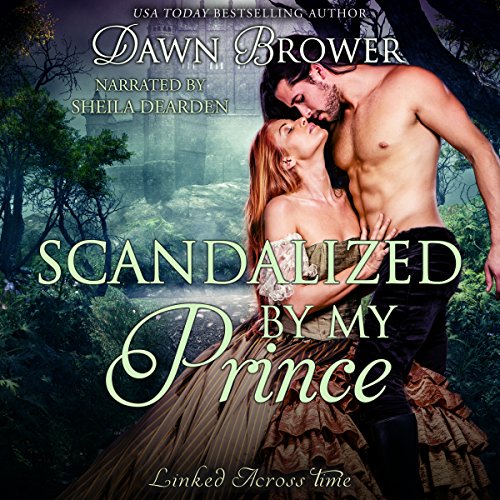 Scandalized by My Prince

Dr. Aubriella Byrne isn’t the adventurous sort. The most daring thing she’s ever done is travel to visit her cousin in Kent to research her doctorate. Until she catches a glimpse of a man in another era through a mirror—she takes a leap of faith and goes to his time to find him.

Killian Lynwood, Earl of Thornbury finds Aubriella wandering the lands outside his castle. She has an ethereal beauty and frailty that makes him want to protect her. Safeguarding those he loves has been his duty since he was a small boy, starting with his mother. Aubriella quickly becomes a female he cares deeply for.

Aubriella isn’t sure if she should tell him who she is, or more importantly where she’s from, but secrets and lies have a way of unraveling. Killian has a few of his own he doesn’t want to come to light. The decision to trust each other is a hard one. Sometimes love isn’t enough and their secrets might destroy everything.

What listeners say about Scandalized by My Prince

Time travel at its finest

Another short sweet historical romance about time travel, each of these in this series can be read as a standalone but with each one you get more depth of the family history. This one kind of goes with the ones before where the two stepsisters meet each was surprise to see the other. When Aubriella goes to the manor she learns things about her family she doesn’t know, when she looks in the mirror she sees a man and feels his pull, through the mirror she goes. Once on his land he finds her taking her in, she finds he is to go off on a mission. Since she knows history so well she knows she must keep him safe without him knowing about her abilities and learning that she is doing her best to keep him away from the area he is headed.

This narrator is new to me I didn’t know what to expect. I loved her accents, her character voices are wonderful. She gives such emotions, really getting into the character. You can hear the laughter, fear, sorrow, and love come through her voice. She really paints a vivid picture that is so easy to picture, she pauses giving you enough time to let what you listened to sink in. I really love with a narrator gets into her audio laughing when needing to, crying if that is called for. This is one narrator that does that giving you a touching, fun, emotional listen that pulls you in. I loved her normal voice I could listen to it all day.There were no background noises, no repeating of wording, no volume changes. It is very clear and clean, if breaks were taken I could not tell. Just a delightful listen that I totally loved.

I love this series, there is just something about time travel that gets me every time. Ms. Brower knows how to pull you in giving you an entertaining story. She is very talented and does her research, her stories are very believable and usually hooks you from the first page. I really enjoyed the characters, the plot, the emotions and the passion. I had to laugh at how Aubriella kept Killian from going where he wanted to go but at the same time kept it fun. There was a touchy part when she ran into a family member that almost gave her way. It was a wonderful listen that I didn’t want to end, I could listen to this family all day and never get tired of it. Mostly likely because the author uses no fillers just good home some facts, I can’t wait to listen to the next one.

books in this series 2-5 were interesting and good but the last ones are getting worse and worse. after this book,I am sad that author didn't finish series in around book 6.

This was a cute story but if you don’t start at the number one story you’ll be lost. People going back and forth in time, relatives that have never liked one another then meeting back in the 19th century and each story leading into the next. It can get a little confusing at times.

This was about Killian and Aubriella who met and fell in love when Aubriella walked through the mirror at Bradford and Regina’s home, in order to help the man she saw in the mirror, leaving Trenton to have Serenity to help him go back in time to get Eve and return to the 21st century so she could come back and help her sister then leaving Aubriella in the past with Killian. See? Confusing if you haven’t read the books in order.

This did have explicit sex and the F-bomb was used 4 times.

As to the narration: Sheila Dearden was just okay for me. Not bad or overly good. Her men’s voices are decent but she doesn’t laugh when someone answers with a laugh or whisper or sound angry. I guess she needs more emotions when she reads. For me, anyway.

I love how this author writes so much into a short story. The imagery is spectacular, and the characters are endearing. I thought the story flows well and is a standalone listen and part of a series. The main characters in this story have secrets they are hiding, yet when they open up it is so sweet. The narrator fit the book perfectly. I will definitely listen to more books by this author and narrator. I requested this review copy audiobook and have voluntarily written this review.

Scandalized by My Prince

I have read this entire series and all the books are fantastic. Each book can be read as a standalone, but the more books you read in the series the more is revealed about time travel and how this family is able to accomplish finding true love through time. Brie (Aubriella) is helping Trenton search for his lost love when some documents are found to help them figure out how the time travel is possible. Brie finally realizes its a reality and gives her theory a try and runs fearlessly into the mirror/past after seeing the man she wants to help. She is a great character and her story is a favorite for me in the series.
I loved the narration by Sheila Dearden. She is so easy to listen to and did an amazing job!

One of my favorite of the series

Aubriella is one of the most interestingly female character of the series so far. She’s a strong independent doctor by nature so watching her struggle to play the meek female was quite amusing. Her need to find her cousin leads her to stepping through a mirror to the past to save a man she’s never met. Killian the Earl of Thornbury is a man that needs saving in more ways then one. Learning to trust each other with their secrets makes for a tenderly sweet romance. Aubriella becoming the lady of Kingsbridge a Castle, a Castle she researched and visited in her current time is the stuff fairy tales are made of.

Shelia Dearden does an excellent job with the narration jumping from English to Irish to Scottish. She is the perfect Aubriella.