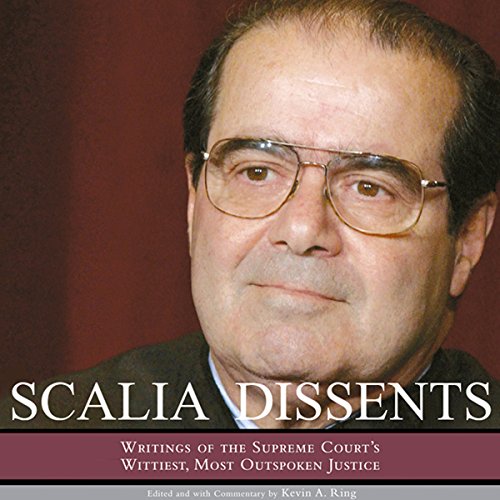 Since his appointment to the Supreme Court in 1986, Associate Justice Antonin Scalia has been described as all of these things, and for good reason. He is perhaps the best-known justice on the Supreme Court today and certainly the most controversial. Yet most Americans have probably not read even one of his several hundred Supreme Court opinions.

Collecting the writing of the Supreme Court's most outspoken and controversial justice, the author here presents speeches, rulings, and opinions that reveal Scalia's wit and intelligence, both on the bench and off.

What listeners say about Scalia Dissents

I thought this book was written by Antonin Scalia but in fact only the inserted section of the dissent is written by Scalia the story is actually written by Kevin A Ring. The book is his narrative about Scalia’s witty words in his dissents. The book provides a brief summary of Scalia’s life. He was born in Trenton New Jersey. Graduated from Georgetown University obtained his law degree from Harvard Law School. He worked for six years in private practice in Cleveland then was a professor of law at University of Chicago. He was appointed Assistant Attorney General under Nixon and Ford. In 1982 President Reagan appointed him to the U.S. Court of Appeals for the DC circuit. In 1986 President Ronald Reagan appointed Scalia to the Supreme Court. Scalia was the first Italian-American Justice and is a devote Catholic. The book was promoted to be about Scalia’s witty and scathing writing but I feel I learned more about Scalia the Justice. In the book Scalia explains his advocacy of textualism in statutory interpretation and originalism in Constitutional interpretation. He says he uses these rules of interpretation in every case as a guide to his decisions. He says he is a strong defender of the separation of powers between the legislative, executive and judicial branches of government. Ring stated that Scalia gets more laughs during oral arguments and any other justice. Scalia states he has obtained dictionaries from the 1770 so he can better understand what the words meant to the people who ratified the Bill or Rights and the Constitution. He also obtains dictionaries from the time constitutional amendments were made as he stated the interpretation must be based on the mean of the words at the time of ratification. Scalia opposes the idea of a living constitution or the powers of the judiciary to modify the meaning to adapt to changing times. Scalia has voted to strike down laws on abortion, environmental protection, civil rights, affirmative action, race and gender discrimination. He vigorously defends the first amendment and the fourth amendment and the death penalty. After reading this book I feel I understand Scalia better and how he interprets the Constitution. Wyntner Woody did a good job narrating the book.

A great compilation of Scalia's writings!

I has suspected as much from Antonin Scalia! He's a remarkable intellect, and a great justice! There are many facets of American life that would be better had he been in the majority, instead of the minority!

If I learned anything, it is that Scalia is a more diverse thinker than I ever knew. As a critic on some of his decisions, I walk away with a profound sense of respect for the time he took to communicate the intricacies of the law.

A wonderful mind explains in understandable terms with wit and style the often incomprehensible reasoning (which is not to imply reason or logic) of the Supreme Court on major topics such as federalism, protected speech, capital punishment, abortion, race, religion, judicial overreach and separation of powers. The format is for Kevin Ring, the author, to summarize each major topic, then summarize Judge Scalia's general reasoning about that topic, and finally to let the judge speak for himself using excepts from his written opinions, which are, delightfully, the majority of the book's content.

I thought the reader could have slowed his pace a bit.

What made the experience of listening to Scalia Dissents the most enjoyable?

the performance was odd. the reading style seemed to change at intervals without any real relevance to the material. like the reader took a week off here and there, then didn't remember his tone from before. I haven't noticed that in other audible products.

Freedom Dissents, Scalia has the back of freedom in America ! The Scalia views are the in accordance with our founding fathers and the constitution that are the bases of our life, liberty and pursuit of happiness.

a must listen for all

Scalia was one of the most truthful and open judges of the past two generations. Do youself a favor and listen to this book to help get an idea of what law *is* and how it should be decided.

Since Marbury v. Madison the Supremes Get a Say

This book is a lucid look into the workings of the last stop for many Constitutional questions here in America. Even if you disagree with Scalia's findings, you will find it difficult to argue with the logical thread as it evolves from first principles to final finding for each of these interesting vignettes. There is a good chance you will learn a new way of looking at some of the important questions facing American society today.

As a Constitutional Originalist, Scalia's dissents are elegant in their dismemberment of the Loose Constructionist positions taken by other members of the Court where new methods of constitutional review or areas of judicial oversight can be, and are, created from whole cloth without a solid foundation in the US Constitution. Judicial Pragmatism as an argument for loose interpretation of the Founder's intent carries no discernible weight with this elegant and articulate writer.

Scalia's use of history, original intent and longstanding jurisprudence bring clarity to many of the issues under discussion in these pages. I found the book a fascinating listen.

As a lawyer, I appreciate a well written opinion. Justice Scalia rarely disappoints in print. The selected opinions are substantive and far reaching. The editor(s?) did a fair job of trying to create context since the main opinions are not part of the recording. This will be a difficult listen if you are new to legal procedure and terminology.

Would you be willing to try another one of Wyntner Woody’s performances?

I'm not sure whether to fault the director or the narrator for the performance quality. Vocal range and tempo are important when reading heavily structured material aloud. This performance was uneven and inconsistent. The speed and pitch frequently changed in mid-paragraph. I often struggled to keep listening.

Was Scalia Dissents worth the listening time?

The Justice was psychic. It's eerie how often his warnings about problems with the Supreme Court's decisions become reality.

It is a good window into how appellate constitutional law works, and why normal people are frustrated with the legal system.

I will recommend the printed version, but not the audio book because the narration by Mr. Woody distorts the otherwise eloquent text, and renders it incomprehensible.

Justice Scalia, because of the strength of his reasoning and consistency in interpretation of the Constitution.

Would you be willing to try another one of Wyntner Woody’s performances?

Was Scalia Dissents worth the listening time?

Not as narrated by Wyntner Woody.

The narration of this book should be assigned to a less strident reader with a more soothing voice, who pauses in the right places, puts the stress on the right syllables of the words, and reads each sentence with the proper cadence