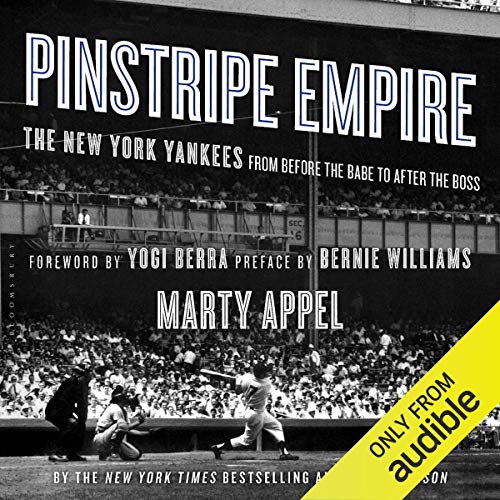 The New York Yankees from Before the Babe to After the Boss
By: Marty Appel
Narrated by: Gregory Gorton
Length: 24 hrs and 11 mins
Categories: Sport, Other
4.5 out of 5 stars 4.5 (2 ratings)

Since their breakthrough championship season in 1923, when Yankee stadium opened, the New York Yankees have been baseball’s most successful, decorated, and colorful franchise. Home to Ruth, Gehrig, DiMaggio, Berra, Mantle, Jackson, and Mattingly; and later Torre, Jeter, Rivera, and Rodriguez, the team has been a fixture in our national consciousness.

Yet it’s been nearly 70 years since Frank Graham wrote the last narrative history of the team. Marty Appel, the Yankees’ PR director during the 1970s, now illuminates the team in all its century-plus of glory: clever, maneuvering owners; rowdy, talented players; and, of course, 27 championships. Appel heard war stories from old-timers like Mantle, Berra, and Casey Stengel, and has remained close to the organization ever since. A collector, writer, and raconteur, he gives life to the team’s history, from the muddy, uneven field at Hilltop Park in the 1900s to the evolution of today’s team as an international brand. Loaded with over a century’s worth of great stories and folklore, this is a treasure trove for lovers of sports, the Yankees, New York history, and America’s game.

What listeners say about Pinstripe Empire

A must read for Yankees fans

Loved this book. So much history. A must read for Yankees fans and fans of baseball.

Really enjoyed this book. The history of the New York Yankees is long, turbulent and incredible successful, and Mr. Appel nailed it.

This book provides a great overview of every season of Yankees baseball from their founding in 1903 through the publication date in 2011. I was especially interested to hear about the pre-Babe years, which are seldom talked about. While the research and historical content is first rate, the narration was lacking a bit. The narrator is not unpleasant to listen to, but so many names were mispronounced that it got to be irritating.

The level of detail is astounding for any Yankee fan. A must listen and great account of the Bronx Bombers.

It is always interesting to learn about teams and people that are or were the best at what they did for a long time. Maintaining greatness is harder then getting it once. True the Yankees have advantages in wealth and fan base. However they still have to win the games they play. I am a neutral observer of baseball. I like the game and this book told me a lot I did not.know. The narration was good but lacked passion. Other then that it was worth the time and the credit..

Great book to learn about Yankee history and ultimately the history of baseball. Very educational.

If you want to learn everything about Yankee history in the most entertaining, accurate, and chronological way, you've come to the right place

Well-researched and presentef, this book is a must for Yankee and MLB Fans. I was admittedly disappointed in a lack of good Babe Ruth and Reggie Jackson v. Billy Martin tales. Being a lifelong Reds fan, I would have liked hearing more on the 1976 World Series. More work on individual stories could have pushed this to 28-30 hours, and I wouldn't have minded it a bit. Still, I found this great effort well worth the listen and fond remembrance of a legendary MLB organization. The Yankees will always be a favorite to me!

For the Yankee and baseball historian in you

Ever since I saw "Pride of the Yankees" as a young kid, I was in awe of the Yankees. Gehrig, Babe, DiMaggio, Mantle... such legends that you only knew in writing. But then to witness Bernie, Mo, Georgie, Paulie and, of course, Jeter... this team is truly special. Pinstripe Empire gives the whole story. The performance really draws you into the history and the author really cares in giving you the whole story, from its beginnings at Hilltop Park. No wonder this is one of the greatest sports franchise in history. Highly recommended for the baseball historian nut and any Yankees fan.

A great history of a great ballclub

The New York Yankees have a proud history not just in baseball but American culture. The Pinestripe Empire captures everything from their beginning as the Highlanders to Babe Ruth to Derek Jeter everything you need is in this great audible listen.

Superb must listen for baseball and Yankee fans

Wonderful detailed book about the greatest teams in baseball history. Great for new fans or those more knowledgable about the game