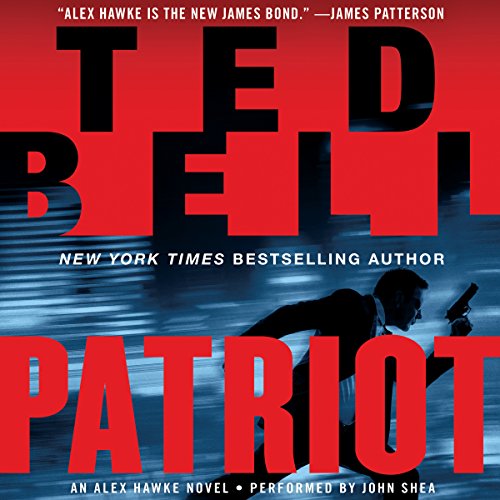 In corrupt Russia, an erratic Vladimir Putin is determined to forge his country into a formidable superpower once again. He intends to redraw the map of Europe and will go to impossible extremes to realize his fantasies - including shooting down a civilian airliner packed with tourists bound for China. Kremlin scientists have developed a radical new weapon that could forever alter modern warfare. NATO, locked in a tense standoff over Ukraine, Poland, and Estonia, knows Putin will not hesitate to use it. But there is one man who can bring the world back from the brink: Britain's foremost intelligence asset, Lord Alexander Hawke.

The intrepid MI6 officer's latest challenge begins in the Gulf of Aden and soon has him searching for the link to a series of bizarre assassinations. Spies are dying all over the world - from London, Washington, DC, and Maine to Moscow and even the glittering Cote d'Azur. In the murky world of counterterrorism and high-stakes intrigue, the odds have never been higher. Once again, Alex Hawke must save the world...one bullet at a time.

What listeners say about Patriot

I’ve enjoyed this series despite them just being over the top. I want to add my own chapter which would start like this, “Somehow, Pelham was able to find a C-130 Spectre, get it started, taxied and lifted from the runway. Raining down the Hell of AGM-114 Hellfire missiles and 120mm mortars, he singlehandedly saved his precious little Alexi”. What do you think?

Did Ted Bell have a stroke?

Someone needs to go and check on Mr Bell. I think someone is releasing these books without his consent (nor did this person bother with an editor).

In the the Lord Hawke world we regularly suspended our disbelief... but you need to be a little substandard to enjoy this book. It's almost entirely a pile of disjointed snippets of a brainstorming session that a junior high student with aspirations to be an author some day fleshed out and then turned in for publishing after the first draft.

Really really basic military, FACTUAL, information was regularly wrong... this book makes Wikipedia look reliable! Hell the author would have done well to do a single google search prior to writing anything about the guns used.

I've never wanted to just stop reading a Alex Hawke book... but after this one I'm not sure I'll pick up and further ones.

A sad addition to a beloved series.

Not really. The book is good if you can get past some of the added information that was completely unnecessary. There was good plot development. The book was about 2 hours too long. I was excited when I found a 16 hour book but it just had too much of nothing that made the book too long.

Once we got past the unneeded information, the plot was good and made me want to listen further.

The narration was ok. It wasn't the best I have heard on Audible but it was appropriate with the story. His use of different voices for different people was good.

The section when the duo got into the Russian meeting and got called on by the leader.

I read the previous books in the Alex Hawke series & lived them. Since I have been listening to audible books, I have found many well written & well narrated books. I was excited to listen to Patriot but was sorely disappointed that the book is not very well written - I was shocked & almost stopped listening after the first few chapters. It's also poorly narrated with little range in voice or accents. Ugh. Bought the next in the series & am tempted to ask audible for a refund.

NOT Roger Moore, and that's a good thing

Russia has a dandy, new, blow-up-the-world weapon, catch me if you can, nyah, nyah, nyah. But this story can't decide if it's about that or something else. The something else is that someone is killing off old spies. The connection between these two plots is one person and one lame rationale only sort of concluded. The spy-killer side just fizzled out.

The narration is full of errors and inconsistencies. Lord Hawke's accent falls onto the southern floosy, and other accents or voices just don't stay put. The reading of the prose was good, but the convos were off.

Hawke and his old butler are great characters, but the author just killed off a few others who might have made future books interesting. Seriously, his kid is gonna need a few years of therapy after this book.

One redeeming quality is the fine character of Hawke. He is no slut like Roger Moore's 007, and that helps the story.

This is an okay book to tide you over till the next one, hopefully better.

Relevant, fiction but non fiction in an odd way I like it. I think the main character is a bit to cheeky but the story is still well thought out.

loved it Ted Bell is a genius makes all the scenes so vivid and the twist and turns edge of my bloody seat. each book a work of art wish he could write as fast as I go through them but hey it is always well worth the wait

Another win for Hawke and Bell

Bell once again captures the tenacity of Alexander Hawke and what he and his friends will do to protect his allies his country and his family. John Shea is my favorite narrator and certainly did not let me down. Now the wait begins for the next adventure of Lord Hawke.

This novel was peppered with absurd situations, characters and contrivances that jarred credulity. Every now and then the author should have asked himself whether what he had written was realistic and logical. Since he apparently did not he has produced a 16 hour audio cartoon that I could not bear beyond the first few hours.

Ted Bell delivers again! Ted has always brought to the pages of his books scenarios that are very real based on our country's time in history. This plot was spot on for NOW! His very real, very well developed characters brought everything to life in this latest page turner. And seriously, I'd love for Mr Bell to be President.